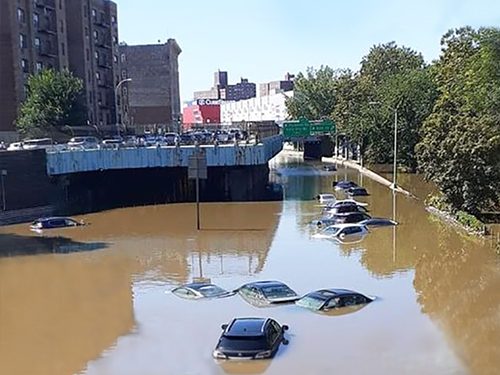 Ten days after Hurricane Ida first began swinging its scythe of destruction and death from the U.S. Gulf Coast all the way up to the streets of New York City, the story of this monster storm has become one of unprepared authorities, inadequate infrastructure, and the most vulnerable, as always, in the crosshairs.

The hurricane made landfall on Sunday, August 29 at Port Fourchon, Louisiana. “From its birth, the storm was destined to become a monster,” The Washington Post wrote the next day. “Scientists had been bracing for the worst since the moment forecasters identified a tropical depression forming last week.”

The storm’s incubator, the Gulf of Mexico, has long been a “hotbed of hurricane formation,” but the climate crisis is turning that hotbed into a hot tub. University of Albany atmospheric scientist Brian Tang told the Post that when water from the Gulf—now “bathtub” warm thanks to global heating—came into contact with even warmer surface water closer to shore, it produced an effect akin to “flooring” the accelerator on a car, transforming a tropical depression into Ida’s Category 4 winds, hitting peak gusts of more than 240 kilometres/150 miles per hour within 72 hours.

Ida’s rapid and intense acceleration is a “canary in the mine” for climate change, said MIT atmospheric scientist Kerry Emanuel. “This is exactly the kind of thing we’re going to have to get used to as the planet warms,” he told the Post. “Things happen faster…It’s getting to a larger velocity, and it’s taking less time to get there.”

And then there is the issue of rain. “For each degree Celsius that air heats up, it is able to hold 7% more moisture,” the Post explains, an increased saturation that “leads to exponentially heavier precipitation during storms.”

This climate change-driven “priming” of the atmosphere meant Ida was able to deliver devastating flooding even as it wound down, writes Grist. “The most torrential downpours in the northeast now unleash 55% more rain compared to the 1950s…and could increase another 40% by the end of the century,” explained Environmental Defense Fund senior scientist Ilissa Ocko, citing findings from the U.S. government’s Fourth National Climate Assessment.

At latest report, Ida had killed 16 people along America’s southeast coast, with 12 deaths reported in Louisiana. And, like with so many recent extreme weather events this year, those hit hardest by the storm have been America’s most vulnerable: the racialized, the sick, the elderly, and the poor.

As Ida made landfall, the Associated Press described roofs being torn off hospitals “filled to the brim” with coronavirus patients, some of whom were left depending on generators to keep their ventilators working. In its first day, the storm knocked out power for more than a million people across Louisiana and Mississippi.

And even before Ida arrived, lives were being upended. Reporting on an unfolding story on September 5, The Washington Post wrote of the chaotic, cruel, and possibly criminal evacuation of more than 800 residents from seven private nursing homes to a “putridly” unsanitary warehouse with no air conditioning. At least seven people, all aged between 52 and 84, died in the warehouse, with five confirmed as “storm-related.” Peter Seidenberg of Louisiana State University’s Health Shreveport School of Medicine told the Post that many of those evacuees went a full day without eating or receiving vital medication.

As Ida approached, those who did not have the means to flee were left to watch the evacuation of those who did.

“Our bank account is empty—we can’t afford to leave,” 27-year-old Robert Owens told The Associated Press. Owens had tried to get a payday loan for gas and lodging so he could evacuate with his wife, disabled mother-in-law, two roommates, and four pets, but the loan was denied. In the end, he and many of his neighbours were left to endure a terrifying night as transformers exploded and trees were uprooted around them.

“The fact that we are not middle class or above, it just kind of keeps coming back to bite us over and over again, in so many different directions and ways—a simple payday advance being one of them,” he said. “It’s like we’re having to pay for being poor, even though we’re trying to not be poor.”

AP notes that Ida’s timing—arriving at the very end of the month—trimmed extra leeway off the knife-edge margins along which too many Louisianians live. “Their funds are pretty close to exhausted, these people who live hand-to-mouth, and so they didn’t have much choice but to stay,” said Craig Colten, a researcher in community resilience at Louisiana State University. “They can’t go get a motel room. They can’t even buy a bus ticket.”

Ida also highlighted a stark division between sections of the U.S. east and Gulf coasts that have storm walls and those that do not, writes The New York Times. “After Hurricane Katrina, an ambitious and expensive system of levees, walls, storm gates, and pumps was installed around New Orleans to protect against the kind of flooding and horror that so deeply scarred the city, and the nation, in 2005,” the Times explains. “And when Hurricane Ida hit last week, exactly 16 years later, those hopes were largely fulfilled. The flooding was minimal.”

But not so in the working-class bayou country south and west of the city, where “local government officials have been trying for decades to secure federal funding for a system similar to the one in New Orleans, to little avail.”

And while some observers hope Ida would prompt authorities to invest in a broader system of levees, others wonder what will happen “when bigger and better-known places are ever more likely to be competing for storm protection funding.” Such fears are grounded, the Times notes: “When the Federal Emergency Management Agency introduced a new program to help cities and states prepare for disasters, the requests far outstripped the amount of money available.”

Jesse Keenan, a professor in climate change adaptation at Tulane University, told the Times the ongoing and accelerating exodus of people from coastal towns will make it harder for those who remain to secure funding for protections. “A lot of these places aren’t going to be around that much longer,” he said. “It’s going to be hard for a lot of those projects to pencil out.”

But historian and fellow Tulane professor Andy Horowitz said cost is not the most important factor for policy-makers to consider. “We can build public works that protect people. We can support them in a humane way to move somewhere safer. Or we can leave them to suffer and die.”

By September 1, Hurricane Ida was moving northeast and slowing into a tropical depression, but still delivering wreckage to those who are least equipped to withstand it. The Washington Post reports that swaths of Louisiana still do not have power, even as much of the state swelters in intense heat, leading authorities to declare a voluntary evacuation order for those most vulnerable to heat stress.

In the northeast, Pennsylvania, New Jersey, New York, and Connecticut all experienced apocalyptic downpours, a deluge that left at least 46 dead, many from drowning. Of the 13 people who drowned in New York City, most died in illegal basement apartments “in immigrant-heavy neighbourhoods that had weathered the worst of the city’s coronavirus outbreak,” reports the Times. Pointing to the systemic lack of adequate and affordable housing in the city, the news story adds that, “across the borough, tens of thousands of people unable to afford the city’s exorbitant rents seek shelter in underground dwellings that often skirt or ignore safety and building codes.”

The Times adds that housing advocates are panning Mayor Bill de Blasio’s plan to use “special phone alerts” to better reach those who live in such dwellings in the event of future floods. “It sounds like the mayor is saying let’s leave people in unregulated, illegal, unsafe basement units at large scale but hope they check their Notify N.Y.C. Twitter alerts, which does not sound like a good way to keep people safe,” said councillor Brad Lander. He called on the city to relaunch a now-shuttered pilot program that helped building owners convert illegal basement apartments to liveable units.

On the federal level, President Joe Biden confirmed the havoc of Hurricane Ida as yet further evidence of the climate crisis, writes Yahoo News. He urged Americans to understand that “we need to be better prepared” because “it’s a matter of life and death.”

Biden promised to push Congress to invest in infrastructure as part of his Build Back Better plan in a bid to make the country’s roads, power grids, and sewer and water systems “more resilient to these superstorms, wildfires, and floods that are going to happen with increasing frequency and ferocity.”

While climate remains a divisively partisan issue in Washington, “some progress” was made last month when the Senate “approved a sweeping bipartisan US$1.2 trillion infrastructure bill that proposes changes targeted at curbing greenhouse gas emissions,” Yahoo writes. Another positive development: “The passage of a $3.5 trillion budget bill with a broad range of investments, including some…that would set goals for transitioning the nation away from burning fossil fuels.”

If they can get through the country’s convoluted legislative process, Yahoo notes, “both bills would invest billions of dollars into clean energy and help bring the U.S. closer to Biden’s pledge to cut emissions at least 50% by the end of the decade.”

Speaking alongside Biden at the media briefing, de Blasio acknowledged that “people are going through hell right now,” and New York City has to change to adapt to the new “the suddenness and totality” of storms. (Click here for a recent Bloomberg City Lab exploration for a look at how this type of change might play out in the city’s transportation grid, and here for a Utility Dive discussion on how to bolster power grids across the country.)

But such progress will come too late for Queens resident Sunciya Vijayarajah. A 42-year-old mother of three whose husband ekes out a living in construction, Vijayarajah moved her parents from their home in Sri Lanka to Queens five years ago, so that they might “have a good life.”

Surveying the catastrophic damage to her home as her parents wept, she told The New York Times, “Our dreams are lost.”