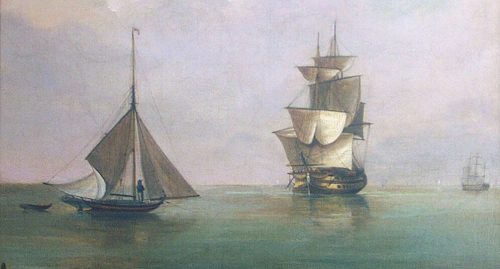 Climate change will alter the blue planet on an almost global scale. Marine life will change in the unknown waters ahead.

LONDON, 3 September, 2021 − By the close of this century, the world’s mariners may be sailing over unknown waters. Up to 95% of the ocean surface climates that Charles Darwin voyaged in the Beagle in the 19th century, and that became part of the global battleground during the wars of the 20th century, will have vanished.

And some − perhaps most − of these climates will be of a kind that have no precedent in human history, or prehistory.

Quite how sharply those familiar waters will disappear depends on what happens to global greenhouse emissions. But at the rates at which humans have been burning fossil fuels so far, somewhere between 35% and almost all the sea surface conditions will have changed, and so will the marine ecosystems that depend upon those conditions.

What happens to the algae and plankton, the pelagic fish and the predators that hunt them, is increasingly difficult to guess: another study has just concluded that even after more than a century of oceanography and marine biological research, humans still don’t know enough about how ocean ecosystems work to be able to be sure of the future.

US researchers write in the journal Scientific Reports that they looked at measurements that define marine surface climate: water temperature, the concentration of dissolved carbon dioxide that defines its pH value on the acid-alkaline chemical spectrum, and the water’s saturation with aragonite, a form of dissolved calcium carbonate, washed over the aeons by the rivers into the sea.

Put simply, as greenhouse gas emissions rise, so the oceans become both warmer and more acidic, and the saturation level of aragonite falls. And as this level falls, corals and other marine creatures find it harder to turn sea water into the shell structures that protect them.

Then they compared their findings with what ocean surfaces will look like if carbon emissions peak in 2050, or − this is sometimes called the “business-as-usual” scenario − in 2100.

Under the first scenario, 35.6% of sea surface climates familiar for the last two centuries may have disappeared. Under the second, 95% will have gone, to be replaced by what the authors call ”novel climates.” And, they say in the constrained syntax of academic language, “the degree of global climate novelty at a location may … indicate how stressful novel conditions will be for all species.

“In contrast, the degree of global climate disappearance for a location may represent how hard it might be for species who are well-adapted to climate at that location to find a similar climate in the future.”

That the marine world is changing is no surprise: scientists have reported again and again that once-valuable species are migrating, or growing smaller, or dwindling in number.

As temperatures rise, oxygen levels drop, leaving some species gasping. As breeding grounds warm, spawning becomes problematic. So researchers can see what is already happening. It’s much harder to guess what the oceans will be like decades from now.

And in a timely study in the journal Progress in Oceanography, a team from Australia, the US, Canada and Europe issues a similar warning: humans are about to voyage into unknown waters.

Global heating is already driving what they call “significant changes in the structure of marine ecosystems” worldwide. That is, the tiny creatures on which bigger fish ultimately depend will change. And that could be bad news for the millions of people who live by the sea, and seafood.

But, they warn, it is becoming difficult to calculate how the denizens of the deep, and the citizens of the shallows, will respond to ocean climate shifts. There is a lot more research to be done, and some complex mathematical challenges ahead.

“We know the impact of climate change on both water temperature and primary production will alter marine ecosystems in fundamental ways. Fish and other marine animals will burn more energy in warmer waters, leaving less scope for growth and reproduction.

“At the same time, in regions where primary production from phytoplankton decreases there will be less food, which will drive marine biomass down further,” said Ryan Heneghan of Queensland University of Technology in Australia, who led the study.

“Between now and 2100, the change in global marine animal biomass across our models varied between a 30% decline and a small increase of 5%. Across all the models, there were biomass declines across most of the world’s oceans, but the models disagreed on where, why and by how much marine biomass would decline under climate change,” he said.

“Attempting to summarise the vast complexity of the global marine ecosystem in a handful of equations is enormously difficult, and global marine ecosystem modelling is a relatively new field of research; our oldest models are just over 10 years old, whereas the climate modelling community were developing their first models over 40 years ago. There is a lot of work to do.” − Climate News Network