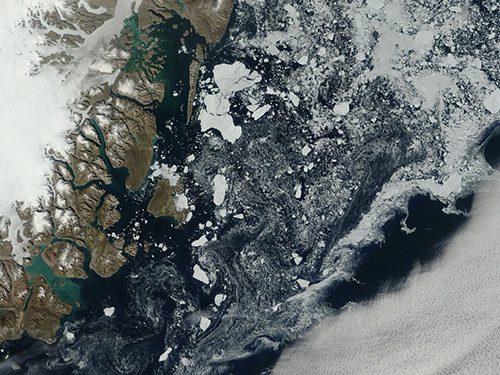 In a recent satellite image of the Greenland ice sheet, pools of blue and a menacing swath of grey signal an ecosystem in an accelerating state of meltdown.

Summer has always meant a degree of melting along the edges of Greenland’s ice, but nothing like what happened this year courtesy of a mid-August heat wave and never-before-seen rain, writes Atlas Obscura. A satellite image of the southwestern corner of the ice sheet taken on August 21 offers both alarming testimony to the effects of that warming and confirmation of worse to come.

The image was taken seven days after Greenland’s highest point—Summit Camp, situated at an elevation of 3,215 metres—experienced its first recorded rainfall, a downpour that produced a one-day melt of surface ice mass seven times higher than the average for mid-August. What it reveals, says U.S. National Snow and Ice Data Center Director Mark Serreze, is an Arctic that is “losing its soul.”

Serreze told Atlas Obscura that while he knew the far north would be the first region to “raise the red flags” as the climate crisis accelerates, he was still deeply shocked by the rain that fell on Summit Camp. Now these new satellite images are revealing those “red flags” in the form of vast stretches of striated, teal-blue meltwater, pooling into lakes up to nine metres deep.

Marco Tedesco, a climate scientist at Columbia University’s Lamont-Doherty Earth Observatory, told Atlas Obscura the “fantastic” quality of the image allows viewers to “really see the story that’s going on here.” And that story, he says, is “poignant.”

“This image is basically a time machine,” Tedesco explained. “You have, on the right, the future: a patchy, wet, slushy ice sheet. You have in the middle the present, which is basically your ice now, frozen. And you have a very deep past on the left, which is also driving the future because, of course, the darker it is, the more it absorbs sunlight and the faster it melts.”