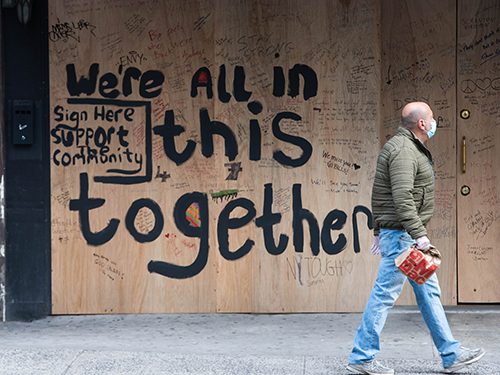 As his home nation continues to execute strict protocols in the face of repeated outbreaks of COVID-19, Australian climate scientist Tim Flannery is urging policy-makers to bring proven pandemic measures to bear in the climate crisis fight.

“The pandemic has taught us a lot. It’s taught us the virtue of early action,” Flannery told the Sydney Morning Herald. “If you leave a problem too long you run out of control.”

He highlighted three aspects of Australia’s rapid response to the public health crisis that could have promise in fighting the climate crisis.

“First was to ‘stem the spread’,” writes the Herald. Where lockdowns and other regulatory measures helped to curb the virus, so too will “immediate measures to curb carbon emissions” in the battle against global heating. The economic measures that Australia put in place to protect jobs and livelihoods during these lockdowns could also help bring a frightened and angry populace around when applied to climate measures, Flannery added.

“With the climate crisis, there are communities all over the country which will need to be brought along into the new clean energy world with a real sense of social justice, that they’re not being left behind,” he said.

Second, with “extra capacity requirements predicted by experts due to climate-related health issues,” emergency departments will need to be bolstered, just as they have been throughout the pandemic. And third, just as Australia welcomed vaccines to fight COVID-19, policy-makers need to help inoculate citizens against the worst of climate harms by embracing “holistic” measures like replanting old-growth forests.

“A lot of people think it’s just stopping the problem from getting worse by cutting emissions,” said Flannery. “Well, that’s part of it, but there’s a whole series of other things that the pandemic has taught us that we need to keep an eye on.” For example, the Herald notes, experts are now making the link between the climate crisis and disease outbreaks (such as dengue fever in Australia).

While he does perceive “a shifting in the momentum from government and industry on the issue of climate change,” Flannery said the work still needs more urgency.

“I don’t deal with hope or despair, I just know what needs to be done, and I’m encouraging people to get on with it as quickly as we can,” he said.

One the other side of the world, British Columbian businesses and researchers are developing their own pathways to hope, reports CBC News. B.C.-based oceanographer and environmental consultant Alan Shapiro told CBC he sees a lot of potential in a new unmanned vehicle developed by Victoria, B.C.-based Open Ocean Robotics, which can remain at sea for months collecting urgently needed data on everything from sea levels to fuel-efficient shipping routes.

Another B.C. resident who sees cause for hope is fire ecologist Robert Gray, who is urging the province to incorporate Indigenous knowledge into its fire management strategies.

“For generations, Indigenous people used controlled burning to get rid of underbrush and other excess fire fuel that could enable a wildfire to grow out of control,” explains CBC. Today, said Gray, such burns are “a long-term solution” that could help modern-day firefighting crews.

“Historically, average fire size was less than 50 hectares and we can actually get back to that,” Gray told CBC.