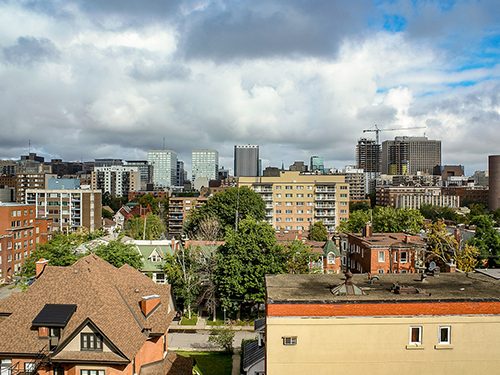 Despite pious declarations from municipal leaders, the City of Ottawa’s soon-to-be released official plan shows little sign of alarm about the two major crises the city is facing, says a local citizens’ alliance.

“Ottawa has declared two emergencies, a climate emergency and a housing and homelessness emergency,” write Carolyn Whitzman and Paul Johanis in a recent op-ed in the Ottawa Citizen. “The two are intrinsically linked and require a response worthy of an emergency. That is not what we see in the official plan.”

Whitzman, an adjunct professor at the University of Ottawa School of Geography, Environment and Geomatics, and, Johanis, chair of the Greenspace Alliance of Canada’s Capital, are part of the People’s Official Plan (POP), an alliance of local groups asking the City of Ottawa to forge a new plan that treats both crises as the emergencies they have been formally declared to be. [Disclosure: The Energy Mix publisher Mitchell Beer was a volunteer participant in earlier stages of the POP.]

Ottawa’s soon-to-be finalized plan will guide the physical development of the city out to 2045, and will also be the framework for the city’s upcoming Climate Change and Greenspace Master Plan, Transportation Master Plan, and Waste Management Master Plan. According to the POP, the city’s keystone plan is not “moving far enough and fast enough” on the two most pressing emergencies: climate and affordable housing.

Last month’s alarming new science assessment from the Intergovernmental Panel on Climate Change has only revealed “just how stark our choices are looking ahead,” write Whitzman and Johanis—along with the necessity of taking fast and meaningful action at every level of decision-making.

“While higher levels of government have critical leadership roles to play, the policies guiding what happens in our neighbourhoods can make significant differences to climate change and the housing crisis and are, in some ways, the places we have the most control.”

They also point to the cognitive dissonance involved in declaring a climate and housing emergency, as Ottawa’s city government has done, while continuing to propose policies that will only make both “intrinsically linked” emergencies worse.

“Providing roads and services to our ever-expanding urban boundary encourages sprawl and costs much more than building in already serviced areas. It doesn’t enable affordable housing, because the outer reaches of our municipality are zoned for single family homeownership, at a price point increasingly out of reach for many,” they write. By contrast, “enhancing walkability, reducing car reliance, and increasing options for transit will in turn reduce the 44% of Ottawa’s emissions related to vehicles.”

An official plan that takes the climate crisis seriously would also include a detailed plan for building efficiency, and for increasing the city’s tree canopy, the authors add. While such an increase is in the works (in recognition of the multiple public health benefits that trees bring, especially in cities), there is at present no guarantee that the neighbourhoods most in need will see their streets and public spaces grow greener.