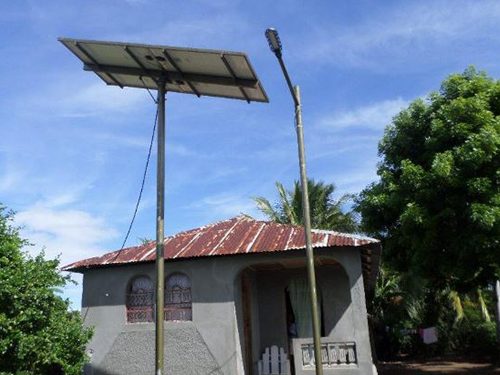 Technicians at EarthSpark International—a key provider of microgrid power in Haiti—breathed a sigh of relief in the immediate aftermath of the August 14 quake, when they confirmed that their 100-kilowatt community microgrid in the southern town of Les Anglais was able to restart after being remotely de-energized to check for damage, reports Microgrid Knowledge.

Such resilience meant swift restoration of critical mobile phone service to the 2,000 area residents linked to that grid. Mourning families had the power they needed to bury their dead swiftly, a critical community health requirement as landslides had left citizens unable to transfer the bodies of their loved ones to morgues.

Also surviving the quake was a 95-kilowatt EarthSpark microgrid serving close to 400 residents in Tiburon, a small fishing village in the south of the country, as well as a system operated by the Cooperative Électrique de l’Arrondissement des Côteaux, also in the south, that has provided power to some 1,200 people since August 2017.

The status of three small microgrids run by private utility Sigora Haiti remained unconfirmed at the time of the Microgrid Knowledge report.

“If we have more distributed energy, solar plus storage, throughout the grid, we’re less reliant on any piece of infrastructure,” she said.

The company is raising funds for a project that would see new community microgrids built to serve 22 towns that currently depend on diesel generators. The United Nations Green Climate Fund is providing US$9.9 million toward the $45 million project. EarthSpark will need to fundraise for the rest.

The new microgrids will be fed entirely by renewable energy, the news story states. Noting that diesel shortages have long constituted a major challenge to grid security (even now, the Les Anglais grid includes a small fraction of diesel), Archambault vowed to move rapidly to 100% solar and storage.

“We will never use diesel again,” she said.