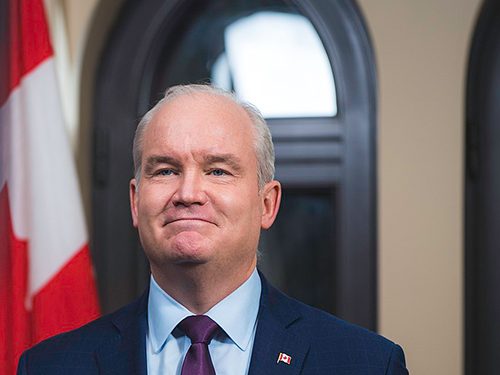 Canada would face “diplomatic disaster” and isolation globally if Conservative leader Erin O’Toole carried through on his promise to scale back Canada’s carbon reduction commitments under the Paris agreement, a top climate policy analyst warned, as the federal election entered its third week.

On Monday, O’Toole doubled down on his intention to abandon the previous government’s pledge to reduce the country’s greenhouse gas emissions 40 to 45% by 2030, Global News reports, despite expert warnings that a backwards step would violate a key tenet of the 2015 Paris deal.

O’Toole “claims Canada can submit a new, less ambitious climate target without major scrutiny” from the United Nations climate secretariat, tweeted Eddy Pérez, a former staffer with the Intergovernmental Panel on Climate Change now working as international climate diplomacy manager at Climate Action Network-Canada. “That’s a wrong understanding of the #ParisAgreement. Once a government submits a target, it becomes Canada’s commitment and obligation to Paris.”

Now that Canada has formally filed its updated commitment with the UN, the updated 2020 goal is “not ‘@JustinTrudeau’s target’ anymore,” he said. “It’s the target the party that wins power will report to at #COP26 in Glasgow.”

While the Paris accord was built to be flexible, Pérez added, it’s “a dynamic structure built on the spirit of progression—all countries expect Canada’s climate policy and targets to progress over time. Backsliding from your obligations is simply not acceptable and violates the rules of the game agreed on five years ago.”

Moreover, if a future government committed such a “direct violation of the Paris compromise,” he asked, “how could Canada ask other countries to do more on climate action if we don’t respect the rules of the game?”

The Conservative leader’s remarks Monday included a promise to back construction of the Northern Gateway pipeline, a controversial project that was cancelled after a court ruled it had been approved without adequate consultation with First Nations, the Globe and Mail writes.

O’Toole “also said he would commit to Canada’s net-zero emissions target for 2050,” the Globe writes. “Asked how his support for Northern Gateway squares with the International Energy [Agency’s] assessment that investment in oil and gas must stop immediately if the world is to reach net-zero emissions by 2050, Mr. O’Toole did not address the question. Instead, he pointed out that the pipeline has backing from some Indigenous groups.”

Before the Federal Court of Appeal killed the Northern Gateway project in 2016, Calgary-based Enbridge “won support for the project by negotiating equity agreements with many of the First Nations communities along the pipeline route,” the Globe recalls. “But support for the pipeline was far from unanimous. It was opposed by some coastal First Nations, who feared a tanker spill. Some inland bands were concerned about a pipeline leak into freshwater. Environmental groups were also against the project, as was John Horgan, who is now B.C.’s premier.”

The Trudeau government subsequently adopted a moratorium on oil tanker traffic off the north coast of B.C., which the Conservatives say they will repeal if the form a government.