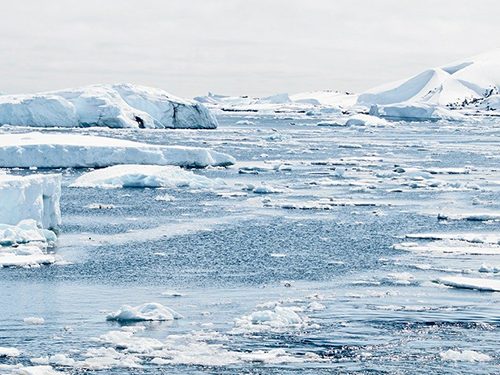 A new model of climate tipping points shows them increasing the future economic costs of climate change by at least one-quarter, or as much as 100%.

“Our aim has been to develop a more quantitative, structured understanding of the whole issue, so that climate tipping points are better reflected in the policy advice economists give on climate change,” writes the research team behind the new study in the Proceedings of the National Academy of the Sciences. A tipping point arises when the next increment of greenhouse gas emissions shifts the structure of one of the Earth’s natural systems, producing a cascade of climate impacts out of proportion to the emissions themselves.

The researchers reviewed past tipping point studies and adapted the results to a standardized model. They calculated economic effects in line with the social cost of carbon (SCC), which the U.S. Environmental Protection Agency defines as “a measure, in dollars, of the long-term damage done by a tonne of CO2 emissions in a given year.”

“The SCC is perhaps the key welfare measure of climate change in policy discussions, as it can be used to set carbon prices and inform mitigation efforts,” write the researchers.

The resulting model shows that most tipping points increase the social cost of carbon, especially those caused by carbon-cycle feedback from greenhouse gases released by ocean sediments or melting permafrost. While they predict that climate tipping points will increase the SCC by roughly 25%, they note the available data also suggests a 10% chance of the SCC doubling.

In a surprise finding, two of the tipping points—the Atlantic Meridional Overturning Circulation (AMOC) slowdown and the loss of reflectivity on ice caps—decreased the SCC, though only slightly. In its coverage of the study, Ars Technica explains that “the former limits the warming in the North Atlantic, and the latter produces more warming near the poles, both of which are economically favourable.” [That is, if you consider the loss of the entire traditional economy and built infrastructure across the Arctic “economically favourable”—Ed.]

The analysis does not cover all known tipping points—the authors say they excluded boreal forest dieback and West African monsoon variability—nor does it account for all interactions among tipping points.

The social cost of carbon is now the focus of several debates in climate policy, including ongoing disagreement about whether U.S. climate policy should continue to be based on that metric or should instead adopt a tool used by the European Union. Furthermore, reports E&E News, a Republican lawsuit is now challenging the Biden administration’s authority to issue an executive order creating an interagency working group to reevaluate the SCC.

The order to update the Trump era’s low calculation was one of Joe Biden’s first actions as president, and will “enable far more aggressive regulatory action for at least the next four years,” writes Ars Technica.