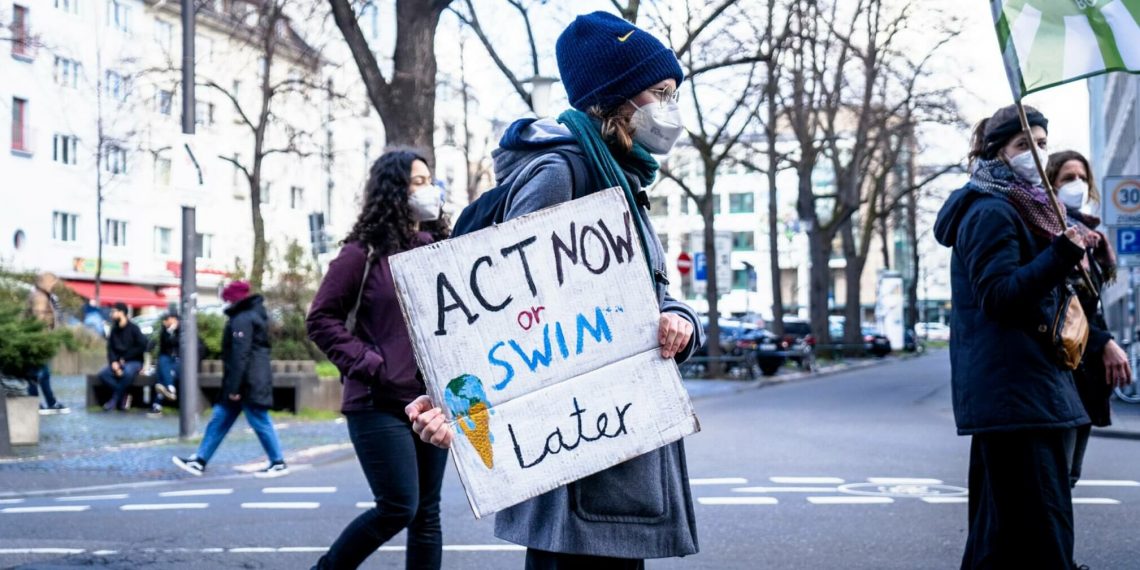 Not sure the seas are rising? Here’s some simple advice for climate deniers. Image: By Mika Baumeister on Unsplash

People who deny that climate change is happening have something in common with people who believe in a flat Earth.

LONDON, 30 August, 2021 − Dover, a town in the county of Kent in the United Kingdom, was during the 1960s rich in eccentrics: one of them was Mr Samuel Shenton, founder and secretary of the International Flat Earth Research Society.

He was regarded with affection and merriment by local and even national newspaper reporters, and so was solemnly consulted during the US Apollo programme, the race to the moon. In 1965 he refused to believe that a photograph of the curvature of the Earth, taken by astronauts on a Gemini mission, proved that the planet was a sphere. Or that it was moving in space at 30kms a second.

“If we were going at such a tremendous speed through space you wouldn’t be able to get out of your house,” he told a Guardian colleague, “and you’d see the effects on the clouds and the waterways.”

Reportedly at his death his society had no more than 100 members. Then it crossed the Atlantic, and something started to happen.

By 2018, Lee McIntyre, a researcher at Boston University in Massachusetts, could attend a Flat Earth International Conference in Denver, Colorado and use it as a starting point for an enjoyable and even mildly sympathetic new book called How to Talk to a Science Denier (MIT Press, $24.95).

The event became his template for a study of that stubborn phenomenon known as science denial, the outright refusal to accept data, experimental evidence or patient explanation of findings that you have already decided to reject.

In the course of this reporter’s lifetime, such conspicuous refusals have included the link between smoking and cancer and other health conditions; the connection between HIV infection and illness and death from Aids; the value of vaccination as a protection against disease; and most conspicuously, the connection between human exploitation of fossil fuels and the swelling climate crisis.

And although each act of denial begins from an apparently different starting point, the machinery of resistance − that determination not to be persuaded − shares five common factors.

“You cannot change someone’s beliefs against their will, nor can you usually get them to admit there is something they don’t already know”

One is a refusal to accept aspects of the evidence that do not suit your beliefs, but seize upon those that might seem to. This is called cherry-picking: you just believe the bits you like and ignore the rest.

The second factor is a commitment to the notion of massive conspiracy: a global conspiracy if need be, to declare that Covid-19 isn’t a real disease; or alternatively that it is spread by radiation from 5G radio masts; or that all the world’s science academies, almost all the world’s meteorologists and even governments, are in some monstrous plot to pretend that the climate is changing dangerously, when it isn’t, or if it is, it’s because of natural causes.

The third factor is the denunciation of real experts and the reliance on self-appointed experts. The fourth factor almost always involves logical error (we have an example above from Mr Shenton). And the last and − the deniers seem to think − the most clinching tactic is to say: “But you cannot deliver 100% proof.”

In the chapters that follow, McIntyre explores the different forms that denial takes: he talks to coal-miners in Pennsylvania about climate change; he talks to activists and campaigners about the rejection of genetic engineering as a technique for improving crops; to people who reject vaccination as a protection against disease, and to climate deniers. In all cases, he identifies evidence of the five techniques deployed to resist argument.

However, not all forms of rejection are quite as uncompromising as faith in Flat Earth. His miners know about climate change, and yes, know the costs too, but they’re miners. Mining coal is what they do.

Those against genetically-modified crops may turn out to be more concerned about economics, or choice, or the growth of corporate power. People can be vaccine-hesitant (“Is it safe? How do you know?”) rather than flat-out deniers. In each case there are separate issues underlying the unease.

Greek astronomers worked out more than 2,000 years ago that they lived on an orb; to believe the Earth is a stationary disc supported on pillars, Flat Earthers must reject the physics, astronomy and radiation science of Copernicus, Galileo, Newton and Einstein, while at the same time using cellphones and the Internet, products of that science.

Climate deniers have the slightly more tricky challenge of acknowledging the value of science except when it’s climate science.

Each group believes in a massive, worldwide conspiracy to deceive. Two Flat Earthers told McIntyre that the conspiracy to foist the globalist view of the planet was the work of “the Adversary”, the Devil himself.

Climate deniers have the slightly harder task of persuading themselves that climate scientists − Chinese, British, American, Australian, Brazilian or from anywhere in the world − are all conspiring to issue a false message confected for some kind of pecuniary gain or political motive, or for the sake of a hoax, which is a bit more complicated.

There is another compounding factor addressed by this book: the big oil companies decided in 1998 to actually systematically challenge the science, with of course big money: altogether almost a billion dollars a year now flows into an organised climate change counter-movement.

In the US, climate science, like the Covid-19 pandemic itself, has become a party political issue. Nobody gets rich by denying that the Earth is round. Quite a few already very rich people will be yet richer because concerted global action on the climate emergency has been delayed, by systematic cherry-picking, conspiracy theorising, a small army of fake experts and some wilfully illogical reasoning. A very large number are likely to become miserably and even catastrophically poorer.

Meanwhile, how do you talk to a science denier? McIntyre’s suggested approach involves patience, courtesy, a willingness to listen, and to address the denier’s arguments directly.

“You cannot change someone’s beliefs against their will, nor can you usually get them to admit there is something they don’t already know. Harder still might be to get them to change their values or identity.

“But there is no easier path to take when dealing with science deniers. We must try to make them understand … But first we have to go out there, face-to-face, and begin to talk to them.” − Climate News Network