Wildlife Habitat Lost to Wildfire May Take Many Years to Recover 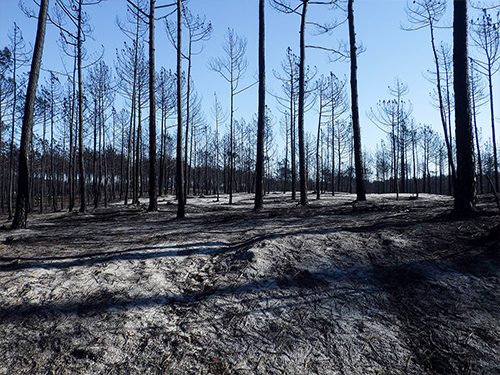 The blazes that have scorched Western Canada this summer have incinerated large areas of wildlife habitat that may take many years to recover.

Just as human homes are in the path of the fires, so is animal habitat, University of British Columbia conservation ecologist Karen Hodges told The Canadian Press.

Scientists are most worried about old-growth forests in fire areas, which are home to the Canada lynx, marten, fisher, caribou, and northern goshawk, she said.

“Then I start getting worried about most of the predators, because they need those big ranges to obtain enough prey and keep enough of a population on the landscape,” she added. “And as we start seeing big fire after big fire, that’s going to be decades of hundreds of square kilometres that’s not great habitat for some time to come.”

Hodges’ team has recently published papers on the impact of wildfires on small animals such as martens, snowshoe hares, and mice, but research is lacking on wildlife habitat ravaged by fires, she said.

The B.C. Wildfire Service said nearly 250 blazes were burning across the province as of last Monday, down from about 270 the previous week thanks to cooler, damp weather.

Premier John Horgan called this year a “challenging” fire season, which included record-breaking heat. He also memorably educated his constituents that “fatalities are a part of life” the day after Lytton, B.C. burned to the ground, before walking the comment back.

While there has been a bit of a reprieve because of the weather, he said last week, “we’re a long way from out of the fire season.”

The Ministry of Forests said in a statement that it takes at least six months to complete assessments on the impact of fires on wildlife.

“The outcomes for wildlife are also highly dependent on the scale and intensity of individual fires,” it said. “The impacts on wildlife of the large-scale, intense wildfires that have been occurring throughout the west in recent years are not well understood.”

Hodges said smaller animals such as voles and mice may find it harder to escape wildfires compared with larger mammals such as wolves or bears. But afterwards, smaller animals can make a home in the destroyed areas faster than the larger ones because they need fewer resources, she said.

“They can, you know, hide among the patches that are still less burned and that sort of thing,” Hodges explained. “Whereas a bear or a cougar needs a bit of habitat, and if the whole thing burned, it’s going to take longer for them to be able to move back into the area.”

Fire is a natural part of this habitat, and some species actually benefit from newly-burned habitat, such as some woodpeckers and fireweed, she added. But the fires burning now are bigger and hotter, and fire season is starting early and ending later, she added, noting there are at least six to eight weeks still to go this year.

“So, we really are seeing a big reset of habitats.”

Hodges said she is most concerned about the lack of endangered species laws to protect animals in such a fast-changing environment. “We expect more flood. We expect more fires. It takes decades to regrow forests once they have been burned or harvested, so wildlife are taking a big hit.”

Another major threat to species is post-fire salvage logging, which slows the regrowth of habitat for many animals, she said. “We need to have decision-making space to ensure that these disturbances don’t drive species over the edge.”

Earlier this summer, CBC talked to three scientists about the impacts wildlife will face as wildfires in Ontario’s boreal forest become more frequent and intense.

“Animals are adapted to wildfire. Some animals head to the water and others escape ahead of the fire,” said Connie O’Connor, director of the Ontario Northern Boreal Program for the Wildlife Conservation Society (WCS) of Canada. But “my fear as a wildlife scientist is that these fires are going to get to the stage where it is too much for animals’ natural adaptations to fire to handle any more, that it’s going to kind of overwhelm them.”

The main body of this story was originally published by The Canadian Press on August 24, 2021