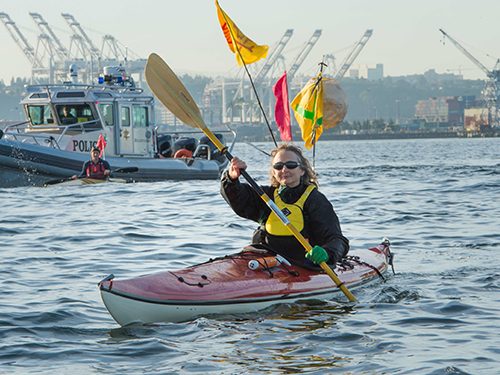 The company behind the controversial Cambo oilfield off the Shetland Islands has postponed construction work to next year, citing “operational issues” and bad weather, after Greenpeace kayaks blocked construction equipment from departing a port in Norway.

“A safety notice published earlier this month indicated that the ship was to bring the kit to the oil field site on 25 August—despite the project not yet receiving a development permit from the UK government,” The Independent reports. “In a letter to the business secretary, Greenpeace argued that carrying out this work without a permit would be unlawful and urged the government to intervene.”

“The company also said that its contractor had received the proper consent to carry out the preparation work, claiming that this is separate to the approvals needed for the full development of the project,” The Independent writes. But an environmental lawyer in the UK said the delay showed “that oil and gas companies are no longer able to avoid public scrutiny of their polluting activities.”

“That time is over, now that we understand the catastrophic damage they are causing to our climate,” Uplift founder Tessa Khan told The Independent. “Siccar Point’s apparent back-pedalling this morning suggests that they’ve realized this, too. But it is up to our elected politicians to step in and stop this harm. That starts with [Prime Minister] Boris Johnson halting the Cambo development.”

Earlier this month, Scotland Office Minister David Duguid ludicrously suggested the Cambo project would not be a major climate risk because the petroleum it would produce—and the carbon dioxide emissions it would embody—could sit in barrels rather than being burned, The Sunday Times reported.

“Well, we’re not just extracting it to sit in barrels are we?” the BBC host replied. “We are going to use it?”

“Well, technically, you could. I mean, that’s the beauty of oil, is you can actually store it,” Duguid replied. “Gas is less, is more complicated to store. The way I think to look at it is, better to have the oil and gas there and not need it, than to need it then have to export from other countries.”

The Times put the expected output of the field at 255 million barrels and 132 million tonnes of carbon dioxide, with Oxfam Scotland estimating it would take a land mass 1.5 times the size of Scotland to counter the project’s climate impact. DeSmog says the Cambo field would produce 800 million barrels.

Scottish campaigners wrote off Duguid’s remarks as nonsense. “It’s clearly ridiculous to suggest that these companies would extract millions of barrels of oil and just keep them on a shelf somewhere,” said Caroline Rance, climate and energy campaigner at Friends of the Earth Scotland. “But with his comment about keeping oil in the barrels, the Scottish minister is admitting that the oil should never be burned because of the damage it would do to our climate. The safest place to keep this oil is in the ground.”

Rance added that “the UK government is describing this meeting as a ‘fact finding’ mission, but the facts are that we don’t need Cambo or any new fossil fuel developments. There is more than enough oil and gas in existing fields to see us through the energy transition.”

Earlier in the month, Scotland First Minister Nicola Sturgeon urged Johnson to rethink oil and gas permits, Bloomberg Green reported. “We are both well aware of the importance of oil and gas over many decades—not least in terms of jobs—to the Scottish and UK economies,” she wrote. But “the answer to these challenges—given the urgency of the climate emergency—cannot be business as usual.”

Bloomberg says the missive “reflects the mounting pressure on Sturgeon to take a lead on climate ahead of key UN talks in Glasgow later this year. She’s also keen to burnish her green credentials as negotiations continue over a potential cooperation deal in the Scottish parliament with the pro-independence Scottish Greens.”

In The Guardian, Greg Muttitt, senior policy adviser at the International Institute for Sustainable Development, has an explainer on how the UK’s legal obligation to keep extracting North Sea oil and gas contradicts its commitments to net-zero emissions, and the leadership it is expected to show in its role as COP 26 president.