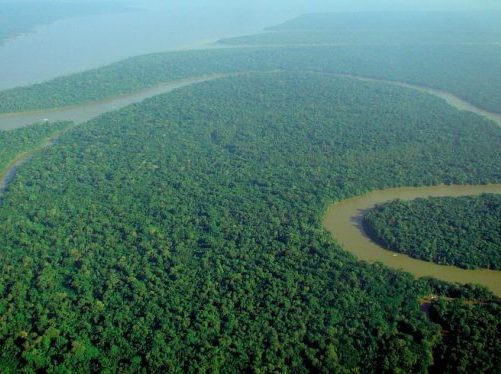 Indigenous people and ecologists in Brazil are aghast that the UK-based Climate Bond Initiative is considering green certification for a 933-kilometre rail line that would run through the Amazon rainforest.

The Grain Railway, or the Ferrogrão, as it is known locally, will run north from Sinop in the heart of the soy- and maize-growing state of Mato Grosso to the port of Miritituba on the Tapajos river, an Amazon tributary, Climate News Network reports. The chosen route runs close to Indigenous areas of the Munduruku, Kayapo and Kayabi peoples, and cuts through the Jamanxim national park, a protected area. To make the route possible, the Brazilian government introduced a law to reduce the park boundaries, though that measure has been suspended by the Supreme Court.

The project “is slated for construction in one of the most diverse and threatened regions of the Brazilian Amazon, closing its eyes to the complex context of socioenvironmental conflicts along its path,” the Pulitzer Center wrote last year. “Ferrogrão is considered a national priority by the federal government, which has used it to showcase its new program of investments for the country, but the railroad is riddled with uncertainties and illusions.”

The government plans to auction the proposed railway, which will cost an estimated R$12.7 billion (almost £2 billion) to build, in January 2022, Climate News Net says. To convince foreign investors that it is environmentally sustainable, Brazil signed a September, 2019 memorandum of understanding with the Climate Bonds Initiative, a non-profit organisation which awards green certification to sustainable projects.

If the CBI awards the project its green seal of approval, it will give the railway’s eventual concessionaire access to green bond funding on an international market now worth an estimated US$1 trillion. A CBI spokesperson said it had not yet evaluated the certification request.

“If I’m going to build a railway in the Amazon, I need to transmit security to investors, principally in terms of image,” explained Brazilian Infrastructure Minister Tarcisio Gomes de Freitas. “We want to be state-of-the-art in green structuring, environmental governance, monitoring of processes, recovery of degraded areas, and crossings for wildlife.”

Freitas said the railway will remove one million tons of carbon dioxide from the atmosphere by providing a cheaper alternative to diesel-fuelled lorry traffic, reducing volume by 90% on the existing road connection between Mato Grosso and Miritituba, known as the BR163 highway. The heavily-used road runs through once-dense forest, now extensively cleared, and without the railway, Ferrogrão proponents say it would have to be duplicated.

The infrastructure ministry says a “green barrier” will be created by planting trees along the railway route, to hold back the encroachment of farmland.

But affected Indigenous peoples strongly dispute idea that this “ecological barrier” will protect the forest, especially since the increasingly unpopular government of President Jair Bolsonaro, aka “Capitão Motoserra” (Captain Chainsaw), has been steadily weakening environmental law enforcement in the Amazon. They argue they have not been properly consulted about the route, as they have a right to be under Convention 169 of the International Labour Organization, to which Brazil is a signatory.

Munduruku leader Alessandra said the railway will accelerate the growth of more soy farms and urbanization. “They are squeezing us more all the time. Where I live, we now have to go a long way to be able to fish.”

Indigenous leaders say they are not against the project, but object to the way it is being executed without consultation. They and environmental NGOs dispute the idea that the railway will be ecologically sustainable, claiming that instead it will cause more deforestation, more clearings, deposits of waste, the suppression of vegetation, and the damming of streams, Climate News Network writes.

The Grain Railway will benefit large, international agribusiness companies that export to China and Europe, and will gain a cheaper route to the international ports on the Amazon river. At the moment, 70% of Mato Grosso’s grain harvest is trucked 2,000 kilometres south to ports like Santos.

The newly-formed Forests and Finance Coalition, an international alliance of almost 50 groups, recently wrote to 80 Brazilian and overseas financial institutions, warning them of the risks of investing in Brazil when the national congress is debating laws which could bring irreversible consequences to critical ecosystems like the Amazon, the Pantanal, and the Cerrado, and to the rights of Indigenous peoples.

Record levels of deforestation and fires are destroying huge swathes of these biomes, supercharged by a major drought, said to be the worst in 90 years. Rivers are drying up, reservoirs are emptying, and fires are raging all over Brazil. If the Grain Railway goes ahead, it will inevitably lead to further rainforest destruction.

For the Bolsonaro government, which has cut funding for environmental protection, dismantled environmental agencies, and encouraged the invasion of Indigenous and protected areas, the backing of a reputable organization like Climate Bonds Initiative is a major gain.

The advantage for the CBI, which says it wants to “place Brazil at the centre of the international market to access global capital flows from international investors who are actively looking for good financial products with climate and environmental credentials,” is not so clear, given the government’s openly anti-environment agenda. − Climate News Network