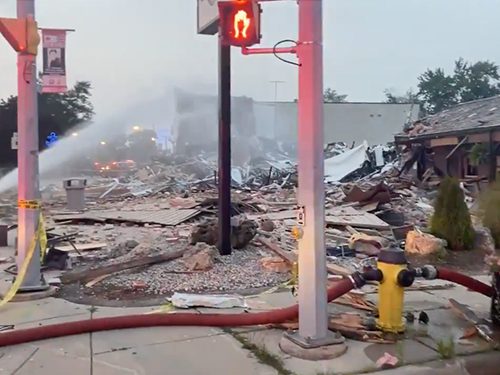 Twenty people were injured and two buildings were destroyed last week in Wheatley, a town of 3,000 people on the southwestern tip of Ontario, after an explosion triggered by a hydrogen sulphide leak from an abandoned gas well that was first declared an emergency on June 3.

Chatham-Kent Mayor Darrin Canniff wants the provincial government to “correct the issue”, saying the municipality can’t investigate because there’s still toxic gas around the site of the explosion, CBC reports. “Gas is still present and leaking at the scene,” Canniff said Friday morning. “It is an unsafe area, and unstable.”

Chatham-Kent fire chief Chris Case had a more colourful description of the scene.

“We literally have a rubble pile with a poisonous, toxic, corrosive, and explosive gas coming up from the floor, and I need someone to come and provide technical expertise about how we can stabilize the situation before we can go anywhere near that building,” he said. “I’m quite angry that our firefighters continually return to save lives on three occasions whilst we still have this unknown risk, and we’re still seeking someone to assist in…protecting our community.”

In an email to CBC Friday evening, the Ministry of Northern Development, Mines, Natural Resources and Forestry said it “began working” with an outside consultant early this month to “determine the source of the leak and to provide technical support (i.e. 24-hour monitoring and historical and industry expertise to the municipality).” The ministry said it had provided “technical expertise and funding” to Chatham-Kent, including round-the-clock monitoring for any additional leaks, and “a petroleum inspector also attended the site [Friday] to provide assistance to the Fire Marshal’s Office as it investigates the cause of the explosion”.

After hydrogen sulphide gas was first detected at 4:30 Thursday afternoon, “Canniff said the immediate area was evacuated, and municipal staff were working to move more people out of nearby spaces when the explosion took place,” CBC writes. Seven of the 20 injured were sent to hospital, and one was still there after emergency surgery.