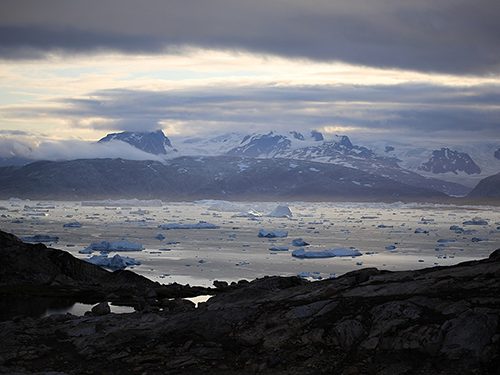 “It’s only the fourth time the temperature has been recorded above freezing at that location. But in the previous instances in 1995, 2012, and 2019, there was no rain,” reports CBC.

A weather station on the 3,215-metre summit noted a peak temperature of 0.48°C at 8:40 AM on the morning of the storm. The actual amount of rain wasn’t recorded because the weather station does not yet have fully installed rain gauges, which had been unnecessary up until this event.

High temperatures are becoming increasingly frequent in Greenland. All four recorded temperatures above 0°C occurred in the past 26 years, says CBC. To assemble data from before 1995, scientists had to look at ice core measurement records, which showed that the last time that temperature had been reached was in the 1880s.

“The science is clear and unambiguous. Our climate is warming and it will have devastating consequences,” tweeted British COP 26 envoy John Murton, responding to the event.

Because rain carries a lot of heat energy, it speeds up glacial melt, says CBC. Scientists recorded an ice melt of 872,000 square kilometres on the day of the rainfall, causing a loss of surface mass seven times higher than the mid-August average.

“We are crossing thresholds not seen in millennia, and frankly this is not going to change until we adjust what we’re doing to the air,” University of Colorado glaciologist Ted Scambos told CNN in its coverage of the event.