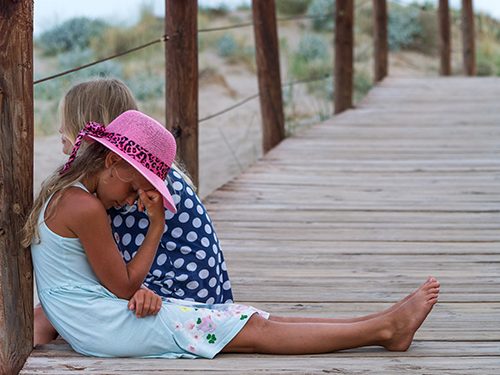 Experts in child psychology and climate stress are saying parents should acknowledge the anxiety that children feel as they bear witness to the effects of climate change.

“It’s difficult to ignore the parched fields and smoky skies caused by catastrophic fires in British Columbia this summer,” writes CBC. “These realities can put stress on young people and their parents.”

What parents shouldn’t do is avoid those conversations or deny any fears out of concern the information will be a burden, said Christine Freethy, a social worker based in Saskatoon, Saskatchewan. She told CBC that parents would likely be surprised by how much their kids already know.

“Have a very frank discussion with them,” she advised.

Still, parents may struggle to decide at what age to discuss climate change with their kids, or how much information is appropriate to share. EnviroCollective’s Amy Snider, a mother in Saskatoon, says she fears such information may be too much of a burden for her children, and that “to know people are destroying the planet” could cause psychological harm.

“We are doing things to damage ecosystems that are necessary for the life systems on Earth to function, and just simply that we’re ruining the beauty around us,” she said. That knowledge, she says, already weighs heavily on her son.

“That gives me deep grief, this deep, intense grief,” she told CBC.

Freethy, who works with children to address anxiety and depression caused by climate change fears, suggested considering the age of the child and perhaps introducing concepts gradually. A first step is to ask what the child is thinking or is concerned about, and to confirm what the child understands about climate change.

Parents should then acknowledge any feelings and start the conversation by alleviating some of that anxiety, being sure to address any feelings of hopelessness. One helpful tactic is to discuss possible actions their children can take—CBC lists using less energy or planting more trees, and the youth climate movement offers a whole other menu of possibilities.

“There’s a real worry about their future. What will the future be like? They have children who have a very vivid imagination. So they have like a dystopian idea of the future,” said Freethy. She added that impacts from climate change, however severe, might not be as “inventive or as extreme as a seven- or eight- or 10-year-old can imagine.”

Vancouver Anxiety Centre Director Christine Korol, who also works with families to navigate climate stress, said misconceptions and confusion can make a child’s anxiety worse, CBC reports. The experience can be even more serious for kids with obsessive-compulsive or other anxiety disorders, she added.

Korol also warns that, when discussing the topic with older children, parents should expect them to come back angry or frustrated. “Help them process some of that anger and agree with them and tell them that their perspective is not completely off,” she told CBC. “But then get them to focus on problem solving.”

Both counsellors emphasize that parents should take their children’s concerns seriously and try to help them channel their feelings into proactive steps. “I really think that one of the most important things for parents is to acknowledge that the grief and the anxiety is real,” said Freethy.