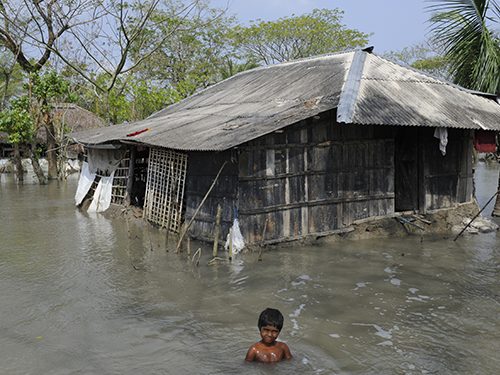 Nearly half of the world’s 2.2 billion children face “extremely high risk” due to the climate crisis and other forms of pollution, according to a new UNICEF report released late last week, marking the third anniversary of the start of #FridaysforFuture founder Greta Thunberg’s school strike.

The report is the first to paint a “complete picture of where and how children are vulnerable to climate change,” said UNICEF Executive Director Henrietta Fore, “and that picture is almost unimaginably dire. Virtually no child’s life will be unaffected.”

“Nearly every child around the world was at risk from at least one of these impacts today, including heat waves, floods, cyclones, disease, drought, and air pollution,” The Guardian writes, citing the report. “But one billion children live in 33 countries facing three or four impacts simultaneously, including India, Nigeria, the Philippines, and much of sub-Saharan Africa.

Those impacts are “deeply inequitable”, UNICEF added, and they’re likely to become more so. “The top 10 countries that are at extremely high risk are only responsible for 0.5% of global emissions.”

At present, The Guardian says, 920 million children are “highly exposed” to water scarcity, 820 million to heat waves, and 600 million to diseases like malaria and dengue that are made worse by climate change.

But at the same time, “there is still time to act,” she stressed. “Improving children’s access to essential services can significantly increase their ability to survive these climate hazards.” So the international agency is urging governments and businesses to “listen to children and prioritize actions that protect them from impacts, while accelerating work to dramatically reduce greenhouse gas emissions.”

At this year’s United Nations climate conference, COP 26, in Glasgow, UNICEF is urging governments to include children in all negotiations and decisions. “The decisions will define their future,” Fore said. “Children and young people need to be recognized as the rightful heirs of this planet that we all share.”

Thunberg added that youth are already at the centre of climate advocacy.

“We are not just victims, we are also leading the fight,” she said, but decision-makers are “still not treating the climate crisis like an emergency. We are still just talking and greenwashing things instead of taking real action. But, on the other hand, there have been many millions of people mobilized, especially young people, and that is a very important step in the right direction.”

“Climate change is very personal to me,” said Zimbabwe climate activist Nkosilathi Nyathi, who explained that heat waves and floods had interrupted his schooling and left farmers in his village struggling with unpredictable weather. “I’m passionate about the inclusion of young people in decision-making platforms,” as “young people are the world’s most precious natural resource.”

“One of the reasons I’m a climate activist is because I was born into climate change like so many of us have been,” said Philippines climate campaigner Mitzi Jonelle Tan. “I have such vivid memories of doing my homework by candlelight as typhoons raged outside, wiping out the electricity, and growing up being afraid of drowning in my own bedroom because I would wake up to a flooded room.”

COP 26 “has to be the one that changes something,” she added, “because we’ve gone for so long having these conferences only coming up with empty promises and vague plans.”

Forest people offer the best hope of saving them