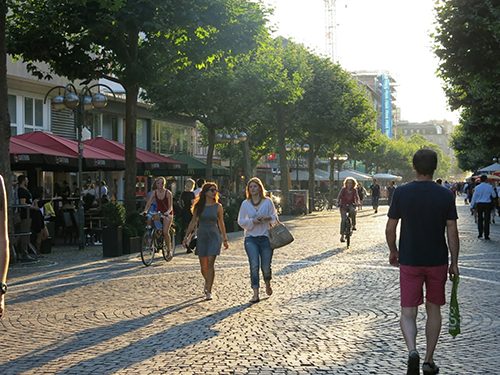 “You can’t chop up the challenges of meeting our everyday needs amidst climate change into neat silos,” Rick Cole, executive director of the Congress for New Urbanism, told Grist.

Urban areas often experience temperatures warmer than their surrounding areas, a result of urban heat island (UHI) effects caused by minimal greenery and a high concentration of paved surfaces and tall buildings. In the United States, racist housing policies practiced throughout the past century have disproportionately increased the intensity of UHIs in low-income neighbourhoods and communities with large Black, Indigenous and People of Colour (BIPOC) communities.

Green areas cover more than 34% of average white neighbourhoods but less than 20% of BIPOC communities, reports Energy News Network. Furthermore, “low-income households pay a disproportionate amount of their income for energy costs in comparison with more affluent residents. They also often live in energy-inefficient homes or apartments without air conditioning, making it even more difficult to deal with excessive heat.”

The consequences of redlining—the systematic practice of denying mortgages or other avenues of financial stability to residents of a neighbourhood based on their race—can be severe. Of the more than 700 people who died during a 1995 heat wave in Chicago, the majority lived in Black communities in the city’s south and west sides. And the impacts of UHIs on communities will become worse as heat waves become more severe and intense.

Redesigning these urban areas is critical to provide protection from extreme heat, but the process will require undoing the infrastructure developed by decades of these inequitable housing policies.

“When we’re talking about heat, it’s not just that low-income and minority communities have less access to green space,” said Urban Systems Lab Director Timon McPhearson. “It’s that they have lower-quality housing. It’s that they have streets that may have also been built out in ways that make it hard to put new street trees in.”

Experts say one option for mitigation is to prioritize redlined areas for projects that expand green spaces and plant trees. And while addressing the impact of tall buildings will be more complicated, some urban planners suggest rooftop gardens and reflective roofing systems can help lower temperatures in tightly packed cities.

However, these measures will not be effective without first addressing the ongoing inequities in current U.S. housing policies, Energy News Network writes. White neighbourhoods still receive the majority of funding from municipal park budgets, despite the greater need in redlined districts.

“We are out of balance right now on issues around climate change and urban development, and have been for a while,” Urban Green Council CEO John Mandyck told Grist. “But we have all the tools to come back in balance, to lower carbon emissions, cool down our cities, and to house and protect the people who have a lot at stake because of climate change.”