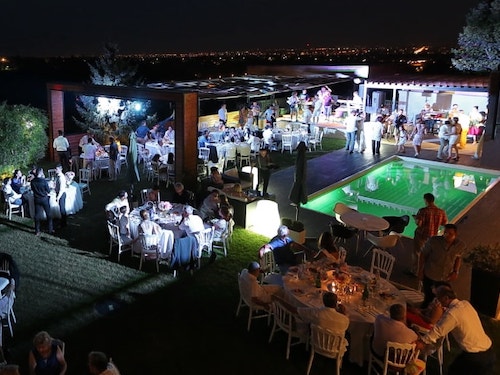 The battery pack on a Ford F-150 light truck saved the day after a rainstorm and power outage plunged a backyard wedding reception into darkness earlier this month.

The music stopped and the lights went out, the Detroit Free Press reports, until one of the guests realized a solution was just a few minutes away.

“I thought, ‘Oh, crap.’ But then we heard a generator across the street go on,” said the groom, mechanical engineer Vetrivel Chandrasekaran. “And this friend, Harish, said, ‘Yo. I have an F-150. I can just plug it in.’ I said, ‘Wait, that could actually work?’”

The truck was outfitted with four electrical outlets, enough to string power strips for tent lights and a full sound system, the Free Press says. “It was amazing,” said the bride, data scientist Rachna Nanda Kumar. “Everybody was just getting into their groove and, with the help of the F-150, the party lasted until 2 or 3 AM.”

Ford CEO Jim Farley was only too happy to tweet video of the vehicle bringing the party back to life.

“It was such an abrupt thing. We thought maybe it was a circuit breaker,” said Ford mechanical engineer Harish Thiruvengadam. “The groom was ready to call it a night. There was no other option. Then I remembered the PowerBoost. I backed the truck up onto the lawn, took the cords and stretched them across the lawn,” and “no one could believe there were outlets in the pickup bed. They thought there was a generator, but there was no loud sound.”

The mild professional jealousy that ensued was no doubt a Detroit-area moment.

“People stopped by to ask questions,” Thiruvengadam said. “A lot of people there worked for the auto industry and there were competitors and they were a little jealous of our truck. They worked for GM and Chrysler but we—the Ford people—helped them out.”