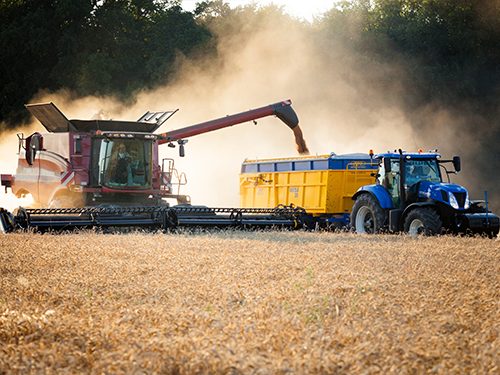 Prairie producers experiencing what may be the worst drought in Canadian history are looking to the federal government—and producers farther east—for a financial lifeline.

“There’s only a handful of lentils here,” he said. “The grasshoppers have shelled out a lot of what was here onto the ground and chewed off a lot of the leaves. Production is down to almost nothing.”

So far in 2021, precipitation has been the lowest on record for Saskatchewan, and July temperatures have been 3 to 4°C hotter than normal. Researchers say this could be the most severe drought on record, exceeding even a decade-long drought during the 1930s.

The diminished output means the farmers who do manage to produce a crop could see a higher return on what they sell. “We could be looking at high grain prices next season and that’s our hope right now—we grow a crop next year and we capitalize on the price increases we’ve seen,” Tallon told CBC. However, farmers often pre-sell crops to maintain cash flow early in the season, and those contracts will now be difficult to fulfill.

Typically, farmers experiencing such losses would be able to avoid financial penalties by buying up the shortage from other farms. Unfortunately, the extent of the drought this year means no one has extra crops to spare, and grain companies are limited in their options to roll over contracts to the following year, writes The Alberta Farmer.

“The shortage of the crop is going to be a problem—not just for the farmers who can’t deliver the product, but also to the grain companies that can’t make their deliveries,” said Ward Toma, general manager of Alberta Canola.

The Canadian government is responding to help farmers through the crisis, reports CBC. A recent statement announced up to C$500 million in farm support though the AgriRecovery program. As well, farmers in the Maritimes are trying to ship what hay they can to prairie provinces through the Hay West initiative, which encourages the sharing of potential third and fourth cuts of hay.

“They don’t need it, but they’ll go and harvest it if it can be a benefit to our fellow farmers out west,” said Nova Scotia Federation of Agriculture President Tim Marsh.

Hay West is not the first such initiative to arise in Canada, reports CBC. The Canadian Federation of Agriculture started a program to address similar circumstances in 2002, and again 10 years later to ship products the other way when farmers in the east were experiencing drought.

Aside from the problems of the current season, Canadian farmers are worrying about the future as experts predict more extreme droughts and floods, CBC notes. Drought conditions this season are also being experienced in the western United States, the Mediterranean region, Kazakhstan, Russia, and Australia.