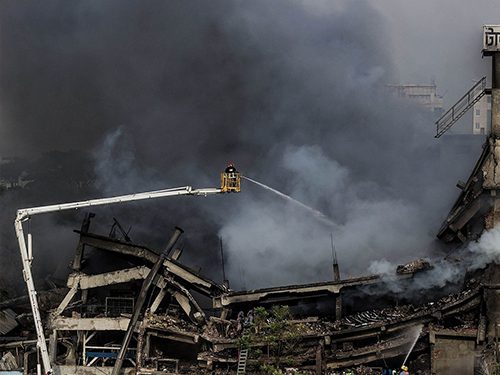 A tragic factory fire in Bangladesh has thrown a spotlight on the dangerous predicament faced by climate change migrants.

Last month, 50 people died when a food processing plant in Dhaka, the capital of Bangladesh, caught fire. Many of those who lost their lives had travelled to the city to find work after losing their livelihoods in their home villages, reports the Thompson Reuters Foundation.

“Thousands of people move from rural areas to cities after floods, increases in salinity, or when their land goes underwater, because that’s their main source of earning,” said climate researcher Atiq Rahman. “But when they go to a new place, they lack the skills to get decent jobs.”

As a low-lying coastal country, Bangladesh is one of the nations that are most vulnerable to high global temperatures. Rising sea levels are eroding and salinating farmland critical for producing food and income in rural communities.

“Four years ago we had land where we could grow vegetables and daal [lentils]. But we lost that to river erosion and now we are back to zero,” said southeast Bangladesh farmer Abul Bashar, whose son Zia died in the fire. “We moved our house away from the river a few years ago but today the river is right next to us once again.”

Families and individuals without alternatives are forced to move to cities for employment, and many find themselves in Dhaka, where they have the best chances of finding a job. However, new arrivals often face overcrowding, poor sanitation, and inadequate housing, not to mention unsafe work conditions.

The expected increase in this climate migration means a growing need to develop systems to manage the influx. The Bangladesh government is now developing plans to promote job opportunities in places with lower populations, as a way to reduce the number of people coming into the country’s cities. A recently-published National Plan for Disaster Management focuses on “creating jobs outside urban areas, ensuring the rights of the displaced, and working on their integration into local communities,” reports Reuters.

In the meantime, labour experts are calling for more stringent enforcement of workplace safety regulations to avoid tragedies like the recent fire, which occurred in a factory that had been built without permission and lacked basic safety measures like emergency fire exits.