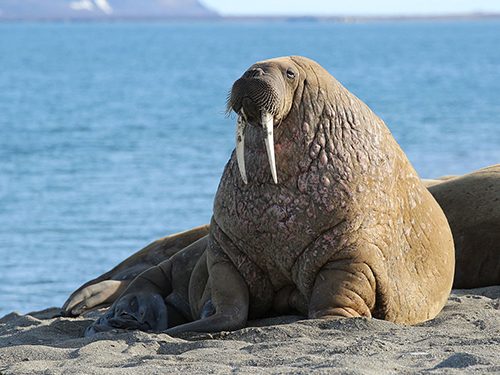 A key ice bridge in Canada’s High Arctic may collapse within decades, taking with it a “globally unique and fertile piece of the Arctic ecosystem,” CBC reports, citing a new study in the journal Nature Communications.

“The North Water Polynya has for millennia produced a life-giving cocktail of organic compounds that ultimately sustain the iconic marine animals found in the Baffin Bay region of the Arctic—narwhal, beluga, walrus, and polar bears—which in turn sustain Inuit settlements in Nunavut and Greenland,” CBC reports. “But the polynya—an area of open water amid ice—depends on the formation of an ice bridge across the southern Kane Basin between Ellesmere Island and Greenland.”

Now, “human-caused global warming and changing sea ice conditions have made the collapse of the ice bridge a relatively imminent danger,” the national broadcaster adds, citing the study by Sofia Ribeiro, senior researcher at the Geological Survey of Denmark and Greenland.

If the ice bridge fails to form, the polynya will collapse with it.

“Basically the timeline of polynya collapse will be going hand in hand with the timeline of Arctic sea ice loss,” Ribeiro told CBC News. “So we’re likely looking at a few years to a few decades before we can no longer talk about the North Water Polynya as something we can expect to happen every year.”

Until now, the ice bridge has acted like “a kind of plug or stopper” to keep old ice from the Arctic Ocean out of Baffin Bay. That matters because “not all sea ice is the same,” CBC explains. “Old multi-year ice from the Arctic Ocean is essentially fresh water,” and if it got into the bay and melted, it would “freshen” the upper layer of the polynya and isolate the top of the water column from the bottom.

“This in turn would reduce the flow and exchange of nutrients that create the polynya’s phytoplankton bloom,” which Ribeiro described as “the base of the food web in the region.”

The North Water Polynya has become unstable in the past, and the web of life that depends on it declined in turn. “The study points to archeological data that shows the polynya’s decline coincided with the abandonment of Greenland by pre-Inuit cultures, and the resurgence of the polynya coincided with the return of human culture to the area,” CBC says.

But “the historical precedent for the ice bridge’s collapse does not mean there’s something normal about what’s happening today,” the news story stresses. “The spike in global temperatures in the late 20th century led not only to the first failure of the Kane Basin ice bridge on record, in 2007, but also the second, third, and fourth, all in quick succession.”

“There’s no doubt that human-caused climate change is…behind the massive Arctic sea ice changes that are happening,” Ribeiro said. “What we saw by looking millennia far back was that in this complex system, Arctic sea ice loss will undoubtedly have cascading effects.”

At least one researcher not involved with the study said Arctic sea ice could rebound fairly quickly with a reduction in greenhouse gas emissions. “It would depend on how that change would interact with the conditions—eg. bathymetry, ocean currents,” wrote Walt Meier, senior researcher and scientist with the U.S. National Snow and Ice Data Center at the University of Colorado Boulder, in an email to CBC. But “even if the sea ice is lost, if GHG levels drop, the sea ice will come back fairly quickly, within five to 10 years.”

CBC has more on the risks to the ice bridge and the polynya, the implications for Inuit, and the urgent need for action.