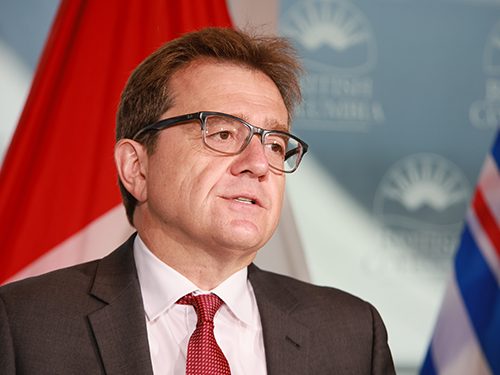 With a federal election likely just days away from being called, sitting governments of all political stripes weighed in with a business-as-usual response to the urgent call to action in this week’s climate science assessment by the Intergovernmental Panel on Climate Change.

After Prime Minister Justin Trudeau responded to the report by tweeting that Canada is warming at twice the global rate, 350 Canada replied that “climate delay is the new, more dangerous form of climate denial,” and “Trudeau is a master at it.” If the PM were “serious about the climate crisis,” 350 added, “his response to the IPCC news would be a moratorium on fossil fuel expansion in Canada, a freeze on projects like [the Trans Mountain pipeline expansion], and immediate action to fast track just transition legislation.”

“Canada needs to ensure that in the context of that transition, it’s extracting full value for its resources and using that money to push forward in terms of reducing emissions,” he told CBC’s Power & Politics show. “What we’re doing is saying it’s got to be part of the transition, but part of the transition is being able to raise the revenues that enable you to actually make the investments that are required to go there.”

Wilkinson acknowledged in an earlier statement that “parts of Western and Northern Canada are warming at three times the global average. Scientists have made a clear link between climate change and more frequent and powerful weather events, including heat waves, wildfires, flooding, and sea ice loss.”

Trudeau and Wilkinson issued those comments on the same day that the Hamburg, Germany-based Statista data portal identified Canada as the biggest per capita carbon polluter among the world’s most wealthy nations, the G7, based on 2017 data.

The report lists fossil gas producer Qatar is the world’s biggest per capita carbon dioxide emitter, at 37.05 tonnes, the Express reports. But Canada placed fourth overall and led the pack among the G7, at 16.85 tonnes per capita, followed closely by the United States at 15.74 tonnes and Germany at 9.7.

In April, Wilkinson said it was “really good news” when the country’s latest greenhouse gas inventory showed emissions increasing fractionally between 2018 and 2019, from 728 to 730 megatonnes, rather than rising even faster.

But Wilkinson wasn’t the only one speaking up for fossil fuel producers in the wake of the IPCC report. “It is a utopian notion that we can suddenly end the use of hydrocarbon-based energy,” Alberta Premier Jason Kenney told media Monday. “The notion that we can shut off a major, industrialized economy with the flick of a switch is patently unrealistic.”

In British Columbia, after NDP Premier John Horgan tweeted that “the climate crisis is here and it is a global emergency,” and “all levels of gov’t must work together to rise to the challenge,” campaign groups pointed to the billions of dollars in subsidies his government has lavished on methane-intensive fracking and liquefied natural gas projects. The annual total has doubled since Horgan took office in 2017 and hit $1.3 billion in 2020-21, en route to an expected $1.8 billion in 2023-24, Stand.earth and Dogwood reported in a mid-June release.

“It’s as if we’re paying someone to go around and throw gasoline on the ground in front of the wildfire fighters,” Tom Green, climate solutions policy analyst at the David Suzuki Foundation, told CBC. “Each tonne of fossil fuels that we burn, each tonne of CO2 that we add to the atmosphere, is a tonne we can’t afford anymore.”

But University of British Columbia political scientist Kathryn Harrison said there’s little political motivation for the province to end fossil subsidies, despite their horrendous climate impact. “They make easy money from royalties from oil and gas and coal production, creating jobs,” she said. “And creating jobs in the four-year electoral cycle is a great way to get re-elected.”

The political state of play had the fossil industry sounding relaxed about its own future in the wake of the IPCC report.

“The industry is confident that they have a place in the future of energy development,” Tristan Goodman, president of the Explorers and Producers Association of Canada, told the Financial Post. “Many of our businesses are entering the renewables space, so it’s not an either or.”

“The Canadian industry has and continues to recognize and embraces the need for alternative forms of ‘green’ energy as part of an ‘energy mix,’ but as we transform our energy development, fossil fuels must remain a part of that mix as there is not a current, viable replacement available,” added Gurpreet Lail, president and CEO of the Petroleum Services Association of Canada.