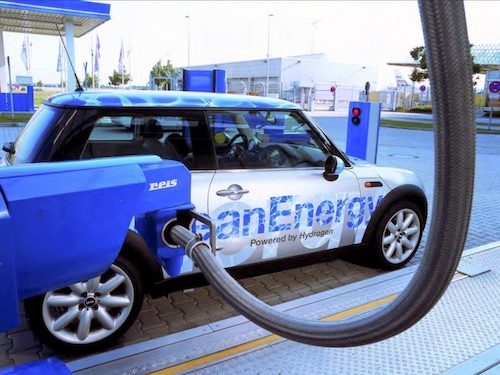 After losing ground on electric vehicles due to its bet big on hydrogen, Toyota is now working to block climate regulations, an effort that includes heavy lobbying of the Biden administration.

“The Toyota Prius hybrid was a milestone in the history of clean cars, attracting millions of buyers worldwide who could do their part for the environment while saving money on gasoline,” writes The New York Times. But now, the former trailblazer is instead a roadblock, becoming “the industry’s strongest voice opposing an all-out transition to electric vehicles—which proponents say is critical to fighting climate change.”

Illustrative of Toyota’s U-turn into climate obfuscation was last month’s pilgrimage to Washington by senior executive Chris Reynolds. Closeted with congressional staff, Reynolds argued that hybrids and hydrogen cars should play a larger and longer role, rather than being phased out in an aggressive move toward all-electric mobility.

And then there are Toyota’s ongoing efforts to oppose stricter vehicle emissions standards, as well as EV mandates, in the United States, Australia, the European Union, India, and the United Kingdom. “Executives at Toyota’s Indian subsidiary publicly criticized India’s target for 100% electric vehicle sales by 2030, saying it was not practical,” the Times writes.

Toyota’s self-interest is clear, as securing a greater market share for its hybrids would allow it time to make good on the promise of its hydrogen cars. And time is not the only issue Toyota is facing in its hopes for hydrogen, notes the Times—a whopping sticker price and a lack of refuelling infrastructure have so far kept sales of hydrogen cars fairly lacklustre.

With all these challenges still ahead, “a rapid shift from gasoline to electric on the roads could be devastating for the company’s market share and bottom line.”

But the car company is trying to frame this evident self-interest in terms of the public good. While the company recognizes that “all-electric vehicles are the future,” a spokesperson told the Times, it also fears that “too little attention is being paid to what happens between today, when 98% of the cars and trucks sold are powered at least in part by gasoline, and that fully electrified future.”

Such claims to represent a sober second thought are unlikely to impress InfluenceMap, a London-based think tank that tracks corporate climate lobbying. The Times writes that the organization “gives Toyota a ‘D-’ grade, the worst among automakers, saying it exerts policy influence to undermine public climate goals.”

Toyota’s anti-EV efforts come even as it used its own nascent hydrogen industry to promote itself as a model of sustainability during the Olympics. “Hydrogen fuelled the Olympic torch for part of its journey, and Toyota’s fleet of sleek Mirai hydrogen fuel cell cars have been whisking Olympic dignitaries around Tokyo,” the Times writes.