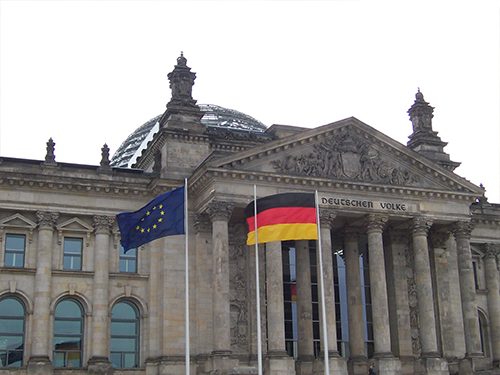 The German Green party has announced plans to establish a climate ministry—with veto power over other agencies’ plans—if they are voted in as part of a new national government in the country’s federal election September 26.

“The climate ministry is to lead a ‘climate task force’, which would convene weekly in a federal government meeting and steer policy toward the goal of limiting global warming to 1.5°C,” reports Clean Energy Wire.

The ministry would have the authority to veto any legislative action that is not compatible with the Paris climate agreement. Establishing the entity is one aspect of the 10-point plan of immediate climate measures the Greens are proposing for their aspirational first 100 days of government.

Other measures include accelerating the Germany’s coal phaseout, increasing the country’s carbon price, and investing an additional €2.5 billion in climate-friendly mobility. The plan would also set a “solar power obligation” for public and commercial buildings and allocate 2% of German land area for wind energy, as steps toward the party’s goal of tripling the current renewable energy expansion targets.

“We will adopt the largest climate protection package ever in the cabinet,” the Greens said in a release.

Earlier, Green candidate for chancellor Annalena Baerbock said her party will “not enter into a government that doesn’t do everything in its power to get on a path compatible with the 1.5°C goal,” Clean Energy Wire reported last month. Recent polls show the Greens in second place, with about 18% of the vote, suggesting they stand a good chance at playing a role in the new government.

The call for a German climate ministry came several days before the release of the Intergovernmental Panel on Climate Change’s Sixth Assessment Report on August 9, which warned of the imminent dangers of failing to enforce immediate emission reductions. Following the report’s release, Baerbock tweeted about the importance of effective climate policy and called for “a faster and more massive expansion of renewables and the commitment to be the first industrial nation to become climate-neutral.”