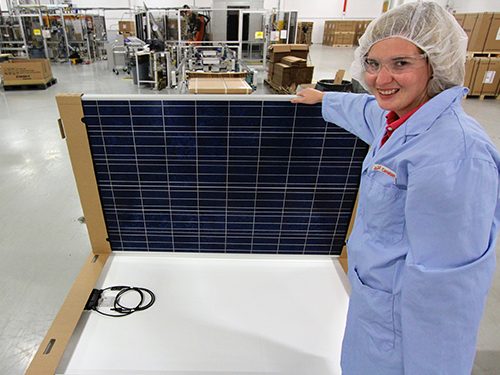 Sault Ste. Marie, Ontario-based solar equipment maker Heliene Inc. is opening a third factory in Riviera Beach, Florida, its second in the United States, with its eye fixed firmly on a burgeoning residential solar market south of the border.

“The electrification of everything we do is unstoppable,” CEO Martin Pochtaruk told Reuters Tuesday, after U.S. President Joe Biden’s signed an executive order last week setting a 2030 deadline for half of the country’s new vehicle production to be electric. “We’re the engine to that.”

Heliene “ is among a small group of foreign solar producers that have set up U.S. factories in recent years after the Trump administration imposed hefty tariffs on overseas-made solar cells and panels,” Reuters writes. The company, which defines its mission as “repairing the world”, also manufactures utility-scale solar equipment from plants in Sault Ste. Marie and Mountain Iron, Minnesota.

The 75,000-square-foot facility in Riveria Beach increases the company’s solar manufacturing capacity by 100 megawatts, PV Magazine writes. “The company said it will begin production at the new facility in September, following upgrades to an existing solar production line previously operated by SolarTech Universal.”

The new plant “will make products based on high-efficiency solar technology known as heterojunction,” Reuters adds, citing Pochtaruk. “The black panels will produce more energy in a smaller footprint than rivals on the market, and look more attractive on rooftops.”

Heliene is also expected to announce a 350-MW expansion of its Mountain Iron plant, PV Mag says, backed by a “multi-million-dollar incentive package” from the state government.

Although manufacturing costs are higher in the U.S., Pochtaruk told Reuters his company “has succeeded because it is able to provide panels without the long wait for them to arrive from overseas.” The Trump tariff on imported panels is set to expire in in 2022, but although a couple of domestic manufacturers want them renewed, “Heliene is not banking on their continuation,” Reuters says.

Massive, Carbon-Intensive Bitcoin Operation to Relocate from China to Alberta