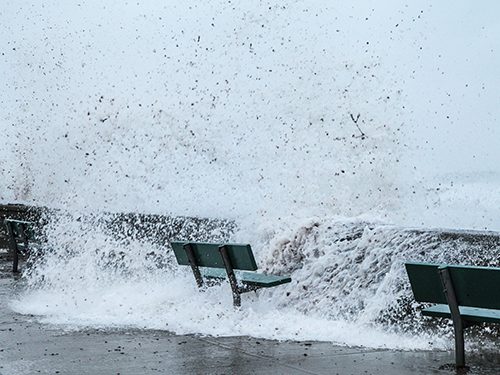 Whether and when you experience drought or inundation—or both—will depend on where you live, but the latest IPCC assessment report has confirmed that the world’s water cycle will keep on growing more and more extreme.

“Continued global warming is projected to further intensify the global water cycle, including its variability, global monsoon precipitation, and the severity of wet and dry events,” write the authors of the AR6 Summary for Policymakers.

The team of scientists who produced the sixth IPCC assessment found that “precipitation and surface water flows are projected to become more variable over most land regions within seasons (high confidence) and from year to year (medium confidence),” while “precipitation is projected to increase over high latitudes, the equatorial Pacific, and parts of the monsoon regions, but decrease over parts of the subtropics and limited areas in the tropics.”

The IPCC sees little relief in sight for the drought-plagued western North America, finding “high confidence in an earlier onset of spring snowmelt, with higher peak flows at the expense of summer flows in snow-dominated regions globally.” Meanwhile, monsoon-dependent regions will find that such precipitation “is projected to increase in the mid- to long-term at global scale, particularly over South and Southeast Asia, East Asia, and West Africa apart from the far-west Sahel (high confidence).” However, the arrival and departure times of these critical rains will lose their age-old dependability.

In a finding critical to policy-makers working on climate mitigation and adaptation at the country and city level, the IPCC projects that while a warming climate will make wet seasons wetter and dry seasons drier, “the location and frequency of these events depend on projected changes in regional atmospheric circulation, including monsoons and mid-latitude storm tracks.”

In a guest post for The Conversation, IPCC author Matthew Barlow writes that the IPCC has confirmed the intensification of the water cycle under human-caused climate change across every line of evidence available to science.

“It is expected from basic physics, projected by computer models, and it already shows up in the observational data as a general increase of rainfall intensity with warming temperatures,” he says.

Barlow stresses that “understanding this and other changes in the water cycle is important for more than preparing for disasters,” since water is life: “an essential resource for all ecosystems and human societies, and particularly agriculture.”

A further eye-opening number that Barlow retrieves from the IPCC report: “Globally, daily extreme precipitation events will likely intensify by about 7% for every 1°C that global temperatures rise.”

Barlow’s call to action is as unequivocal as the report that he helped write: higher greenhouse gas emissions will further intensify a water cycle that—with its historical dependability and moderation—has been the foundation for life and society as we know it.

With this clear correlation in mind, Barlow writes, “reducing emissions will reduce impacts. Every fraction of a degree matters.”