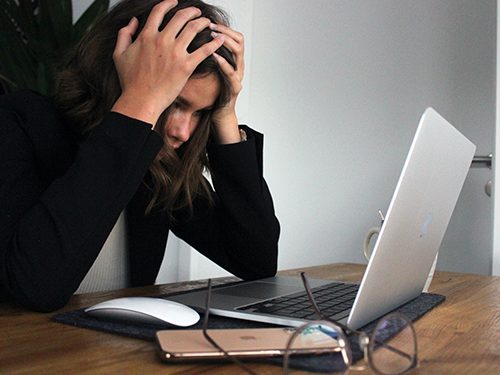 Before yesterday’s science assessment from the Intergovernmental Panel on Climate Change even arrived, climate publications and social media were brimming with advice on how to take in a batch of truly scary news, take some time to rage and grieve—then get back to the work of driving faster, deeper carbon cuts.

“Every fraction of a degree averted is suffering (human and non-human) averted,” Climate Interactive Co-Director Elizabeth Sawin tweeted Friday. “Just because you can’t stop all suffering is not a reason to not prevent what suffering you can. There’s no giving up, my friends.”

“I know we’re all dreading the next IPCC report, but I’d Iike us all to remember that nothing, and I mean NOTHING, changed the conversation and galvanized climate action like the 2018 IPCC report,” Heglar added. “People will get sad and then they will get mad. Be ready.”

In Sunday’s edition of Heglar’s Hot Take newsletter, youth climate podcaster Georgia Wright urged readers to take care of themselves in the face of bad news.

“I’m not the first to point out that this means there’s going to be an onslaught of downright dystopian headlines in the news this week,” she wrote. “They will be designed for maximum terror. And for those of us, like me, who are prone to incapacitating climate grief and anxiety, browsing the Internet is going to be a mental health minefield.”

To cope, she suggested an adaptation on her mom’s advice in response to scary messaging she’d encountered as a teen, reminding climate readers that they’re already worrying about (and working on) the issues that others may be hearing from the IPCC for the first time.

“As you’re exposed to headlines that are crafted to grab the attention of the disengaged, don’t let fear eat you alive,” she said. “You’re already here, aren’t you? Instead of panicking, stay your course. Call your senators. Take a walk. Go to a protest. Do what you need to do to sustain your involvement in this movement. If not for yourself, do it for the climate. We can’t afford burnout—we’re in this bitch for the long haul.”

“There are tipping points in the human heart and the collective consciousness that could be just as sudden and big as any in the Earth system. Just because the IPCC isn’t charged with documenting them does not mean they don’t exist, latent, stirring to life,” she wrote. “And there’s nothing worse than giving up just shy of a tipping point, and no way to know how close you might be.”

The IPCC’s findings “will be most discouraging if you assume that the ‘soft stuff’—people’s willingness to connect, to give, to serve, to be brave, to stand up—will be constant at today’s levels, or at best trend slowly and gradually,” she added. But “I don’t believe that’s a good assumption on a planet that is only getting started burning and flooding. We don’t know (we can worry) what that level of threat will awaken, but it will be novel, and it can be nudged even if it can’t be controlled, and it could be nudged towards something beautiful and powerful and useful and needed.”

In an email exchange Sunday, Sawin had advice for people trying to absorb the latest news.

“I plan on digesting the report with others,” she told The Energy Mix. “What did we just learn? What has changed from our prior understanding? That’s the factual part.” But it’s important not to skip the feelings those facts evoke.

“There’s information there,” she said. “Fear tells us to pay attention, to prioritize the climate crisis. Anger tells us there’s something precious that needs protecting. Grief is part of adjusting to the losses we can’t prevent, and we can honour the grief by preventing even more losses. Don’t bypass feeling those feelings. It’s tempting, but to find the action we each are called to, those feelings have information for us.”

And then, “finally, there’s turning to action,” Sawin continued. “There will be as many actions as there are people to act, but if you go through those first two parts, especially in the company of others, you’ll be well set up to find the way of acting that’s right for you. Where do you have influence? What are you good at? Who can you collaborate with? Give yourself some time to move through those steps and ask those questions.”

In her own Twitter thread, Gimlet Media podcaster and former New York Times climate specialist Kendra Pierre-Louis looked at what that action might look like. In contrast to the other collective problem humanity faces that needs a collective solution—the COVID-19 pandemic—she said the prescription this time is not for most of us to stay home.

[Note to anyone in Ontario: The next provincial election is a maximum 295 days away. The next municipal vote is in 439 days. Are you in?—Ed.]

“We need you to dream,” Pierre-Louis added. “We also need you to get weird: we know we have the technology to keep emissions below 2°C. The tech is there. What we need is the will, the desire, and the effort. This thing we are trying? Nobody’s really ever tried it before.” So “we can learn from past social movements, but there’s TONS of room for creativity and oddity.”

Canada Has ‘Responsibility, Power to Make a Difference’ on IPCC Findings