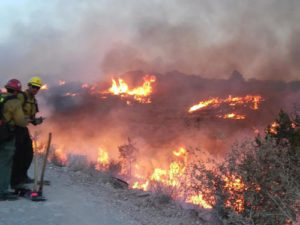 From land and marine heat waves to storms, flooding, drought, and wildfire, extreme weather events have become more common and more intense since the 1950s, and human-caused climate change is the primary driver.

That’s the consensus delivered by the Intergovernmental Panel on Climate Change on Monday with its Sixth Assessment Report (AR6). But while such certainty may inspire a sense of dread, observers are urging the public—and especially policy-makers—to seize the opportunity and use this knowledge to assert political and social power.

Within this stark report, “increased confidence in linking current extreme weather to climate change may be a notable bright spot, offering a potentially crucial weapon that climate activists and communities affected by heat waves and flooding can use to pressure politicians and industry to take action before it’s too late,” writes Time magazine.

But that bright spot is refracted from a litany of scary news. AR6 declares it “virtually certain that hot extremes (including heat waves) have become more frequent and more intense across most land regions since the 1950s, while cold extremes (including cold waves) have become less frequent and less severe.” Science is also able to express high confidence that, due to human-induced climate change, “marine heat waves have approximately doubled in frequency since the 1980s,” while “the frequency and intensity of heavy precipitation events have increased since the 1950s over most land areas.” The report expresses “medium confidence” that “human-induced climate change has contributed to increases in agricultural and ecological droughts in some regions due to increased land evapotranspiration.”

Time explains that the phrase “contributed to” should not be taken to mean lower culpability for humans and our activity. Citing the evolution in understanding of the human impact on rainfall levels, the American news outlet explains that whereas AR6 “states that human influence was likely the main cause of increased extreme rainfall in many regions, and that it ‘contributed’ to more droughts in some parts of the world,” the previous IPCC report in 2014 went only so far as to say that heavy rainfall and emissions were “linked”. For a report built on consensus between 200-plus scientists and 195 nations, that shift in phrasing is notable.

While attribution for changes in global land monsoon precipitation are far trickier to pin down (both internal variability and human-caused aerosol emissions are in play, alongside fossil emissions), the human fingerprint of the climate crisis is also to be found in the increasing frequency of tropical cyclones.

Finally, write the AR6 authors, “human influence has likely increased the chance of compound extreme events since the 1950s. This includes increases in the frequency of concurrent heat waves and droughts on the global scale (high confidence); fire weather [conditions that set the stage for the rapid advance of wildfire, such as high temperatures and high winds] in some regions of all inhabited continents (medium confidence); and compound flooding in some locations (medium confidence).”

“Climate change is a problem that is here now,” declared Inger Andersen, executive director of the United Nations Environment Programme, in the hours after the IPCC release. “Nobody’s safe, and it’s getting worse, faster.”

In its coverage of AR6, The Verge writes that, “across the globe, extreme heat waves now occur five times more frequently than they did between 1850 and 1900,” while “droughts that previously only occurred once every decade are now 70% more frequent than they were in the pre-industrial era.” Regions that once rarely experienced such weather are now getting inundated, with “once-in-a-decade downpours” now happening 30% more often, and tropical cyclones growing notably stronger.

And without drastic emission cuts, things are going to get more dangerous.

“Extreme events will be even more extreme,” writes The Verge, citing the findings of the report. “They’ll be more frequent. There’s a greater chance of extreme events happening back to back or even different kinds of disasters happening at the same time. They’ll happen in places that surprise us. And the timing of these catastrophes will be unpredictable.”

But in the midst of all this certainty about what is happening and what may be to come, there is a far more hopeful, though bracing, kind of certainty to be found in AR6. The confidence—the scientific certainty—that extreme weather is mainly driven by human activity should galvanize us all, writes Time.

Seven years ago, in its fifth assessment, the IPCC “took a fairly cautious tone in describing how climate change was affecting extreme weather, stating primarily that ‘some’ changes in extreme weather in recent decades had been ‘linked to human influences’.” Words like “some” and “linked” functioned then as a “hedge” of sorts, Time writes, “the authors perhaps having suspected that climate change was the primary cause of worsening heat waves around the world, but not having enough evidence to say it definitively.”

As the science of extreme event attribution evolved and the trickle of papers linking extreme weather to human-driven climate change swelled to “a torrent,” so too did the willingness to use stronger language.

And such certainty, in print and spoken word, is paying policy dividends, or at least has the potential to do so.

“Formerly, climate scientists who spoke confidently on global temperature trends could find themselves on shaky ground if the conversation came around to recent extreme weather,” writes Time. But today, “such disasters are driving the discussion, with scientists able to use quantitative methods to show if and how global warming has made such events more likely.”

And such unequivocal proof is urgently needed in the fight for climate action, and climate justice.

“To combat decades of disinformation and deep-pocketed PR machines of corporate players with a short-term interest in burning more fossil fuels, advocates and politicians need clear, unimpeachable scientific statements on which to base their policy proposals and arguments,” explains Time. “With the weight of the most respected climate establishment behind arguments that climate change is worsening heat waves, flooding, wildfires, and other disasters right now, those activists might have a better shot at moving the world to cut emissions, and keep those crises from getting worse in the decades ahead.”

Describing the IPCC report as “a clarion call for urgent action,” the World Meteorological Organization (WMO) is urging investment in climate adaptation, “since the negative trend in climate will continue for the coming decades independent of our success in mitigation.” Central to preparing communities for—now inevitable—future extreme weather events will be investment in early warning and weather observation systems, investment that is currently thin on the ground.

“Only half of the 193 members of WMO have state-of-the-art weather, climate, and hydrological service capabilities,” the UN agency writes. The organization has identified “major gaps in observing networks in Africa, some parts of Latin America, and Pacific and Caribbean Island states, which has a major negative impact on the quality of early warning services in those areas, but also globally.”

To redress this dangerous gap, the WMO says it is “working to close data gaps and to establish a Global Basic Observing Network,” a network it says will be “sustainably funded through a Systematic Observations Financing Facility.”