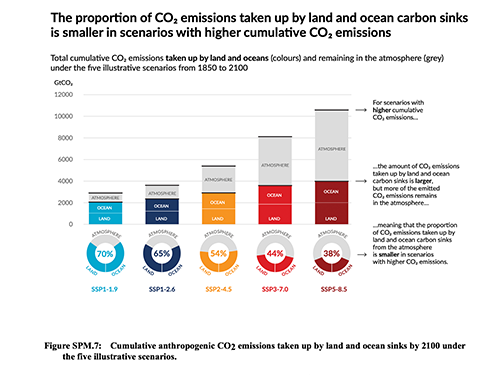 Scientists are “virtually certain” that ocean temperatures will continue rising until the end of this century, and that the transformational impacts of sea level rise, ocean acidification, melting of the cryosphere, and deoxygenation are now irreversible.

“As the ocean has absorbed the vast majority of the excess energy, especially within their top two kilometres, the deep ocean is expected to continue to warm and expand for centuries to millennia, leading to long-term sea level rise—even if atmospheric greenhouse gas levels were to decline,” reports the Intergovernmental Panel on Climate Change (IPCC) in its latest assessment, known as AR6.

Ocean surface temperatures have risen by 0.88°C from pre-industrial levels, and more than three-quarters of that increase has occurred since 1980. Depending on what changes take place in global climate policy, surface temperatures are expected to increase by an additional 0.86 to 2.89°C by the end of this century.

Future outcomes of climate mitigation strategies will be strongly affected by ocean and land carbon sinks, which to date have “roughly halved the rate at which atmospheric CO2 concentrations have increased, and therefore slowed down global warming,” the report states. However, there is a limit to the capacity of these natural sinks to continue soaking up carbon, and the IPCC predicts that natural removal of carbon from the atmosphere is weakening.

Each of the IPCC’s five scenarios shows widening ratios of sequestered carbon to atmospheric carbon as emissions increase. In a low-emissions scenario, ocean and land carbon sinks will be able to absorb 70% of carbon emissions and leave 30% remaining in the atmosphere. But in a high-emissions scenario, even though ocean and land sinks will take up roughly twice as much carbon, the limits to their capacity will leave a full 62% of total carbon in the atmosphere. As a result, natural carbon sinks will have less ability to buffer the consequences as human activity continues to warm the planet.

Changes to oceans will carry some of the most durable consequences of climate change, lasting hundreds if not thousands of years. Ocean acidity is rising, caused by an increase in carbonic acid following ocean absorption of roughly a quarter of all human-caused carbon emissions. Water temperatures, too, are rising, driving a process of ocean deoxygenation that is harmful to marine species.

And the essential cycling of nutrients supported by circulating upper and lower ocean waters will also be reduced as increasing variations in ocean temperature create rigidly distinct layers. These damaging changes “will continue to increase in the 21st century, at rates dependent on future emissions,” predicts the IPCC.

Such ocean impacts are tightly linked with simultaneous changes in the cryosphere, the “portion of the Earth where water is seasonally or continuously frozen as snow or ice.” Rising temperatures will continue melting mountain and polar glaciers for decades or centuries, directly driving sea level rise.

In an interview with The Conversation, AR6 report co-author Robert Kopp said that, “regardless of how quickly nations are able to lower emissions, the world is likely looking at about 15 to 30 centimeters of global average sea level rise through the middle of the century.” The IPCC notes that this rise “will increase the frequency and severity of extreme sea level events at coasts, such as storm surges, wave inundation, and tidal floods,” since “risk can be increased by even small changes in global average sea level.”

However, the extent of that sea level rise will depend on the strength of global action to reduce emissions. “The more the world limits its greenhouse gas emissions, the lower the chance of triggering instabilities in the polar ice sheets that are challenging to model but could substantially increase sea level rise,” said Kopp. In a low-emissions scenario, global sea levels will likely rise by 0.28 to 0.55 metres, compared to 0.63 to 1.01 metres with very high emissions.

And, in a point critical to our future great-grandchildren, Kopp explained that any climate action taken (or not taken) now will have an even greater effect in the long-term future. A low-emissions scenario can maintain sea levels at 0.37 to 0.86 metres above present day looking out to 2150, while in a high-emissions scenario with extreme outcomes, the IPCC “could not rule out rapid ice sheet loss leading to sea level rise approaching two metres by the end of this century.”

Warming temperatures are also affecting weather patterns. Marine heat waves have approximately doubled and have increased in intensity since the 1980s, and even in low-emissions scenarios they are projected to become four times more frequent by 2100. That could rise to an eight-fold increase in high-emissions scenarios.

The IPCC also predicts that global currents driving ocean and weather dynamics—like the Atlantic Meridional Overturning Circulation (AMOC), a critical ocean cycle that includes the Gulf Stream—will weaken over the next century and cause changes in weather patterns. “If such a collapse were to occur, it would very likelycause abrupt shifts in regional weather patterns and water cycle, such as a southward shift in the tropical rain belt, weakening of the African and Asian monsoons and strengthening of Southern Hemisphere monsoons, and drying in Europe,” reports the IPCC.

The predictions are ominous, at best, and the outcomes from changes in oceans and the cryosphere will carry consequences for years to come. However, says Kopp, “while some of the changes will be irreversible for millennia, some can be slowed and others reversed through strong, rapid, and sustained reductions in greenhouse gas emissions.”

Carbon Budget Tally Shows that ‘Every Tonne of CO2’ Counts