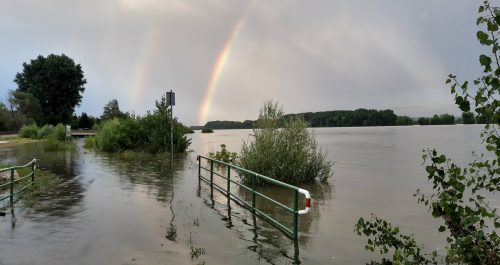 A warmer world will be a wetter one. Ever more people will face a higher flood risk as rivers rise and city streets fill up.

LONDON, 5 August, 2021 − In a world of climate change, the flood risk will be more intense and more frequent, presenting higher danger to ever more people in a greater number of countries.

This finding is not based on mathematical simulations powered by weather data. It is based on direct and detailed observation. Researchers report in the journal Nature that they looked at more than 12,700 satellite images, at a resolution of 250 metres, of 913 large flood events between the years 2000 and 2015.

During those years, and those floods, water spilled from the rivers to inundate a total of 2.23 million square kilometres. This, considered as one event, would cover a total area larger than Saudi Arabia. And during those first 15 years of the century, the number of people directly affected by the floods was at least 255m, and possibly 290m.

“Governments across the world have been too slow in reducing greenhouse gas emissions . . . This, alongside the current floods in Europe, is the wake-up call we need”

In those 15 years, the numbers of people in the way of the ever more devastating floods rose by at least 58m, and possibly as many as 86m. That’s a rise of as much as 24%.

It will get worse. According to the researchers, climate change and the multiplication of human numbers will extend the reach of flood risk: 32 nations already experience ever more flooding. By 2030, another 25 countries will have joined them.

The humans caught up in the sickening flow of mud, sewage and silt spilling from the rising rivers will mostly be in south and south-east Asia − think of the Indus, Ganges-Brahmaputra and Mekong Rivers − and many of them will have migrated to the danger zones: poverty and population pressure will leave them no choice.

None of this should come as a surprise. In the past 50 years, according to a new compilation by the World Meteorological Organisation, weather, climate and water were implicated in 50% of all disasters of any kind; in 45% of all reported deaths and 74% of all economic losses. Floods have claimed 58,700 lives in the last five decades. Between them, floods and storms − the two are often linked − cost Europe at least US$377bn in economic losses.

And things will certainly get much worse for Europe as global average temperatures continue to rise in response to ever higher greenhouse gas emissions from ever greater use of fossil fuels. That is because what had once been relatively rare events will grow in force and frequency.

More heat means more evaporation, and a warmer atmosphere has a greater capacity to absorb water vapour. So it will rain harder. And the arrival, say researchers in the journal Geophysical Research Letters, of intense, slow-moving storms that precipitate devastating flash floods of the kind that swept Belgium and Germany this summer will by the close of the century become 14 times more frequent.

“Governments across the world have been too slow in reducing greenhouse gas emissions and global warming continues apace,” said Hayley Fowler, a climate scientist at Newcastle University in the UK, and one of the researchers.

“This study suggests that changes to extreme storms will be significant and cause an increase in the frequency of devastating flooding across Europe. This, alongside the current floods in Europe, is the wake-up call we need.” − Climate News Network