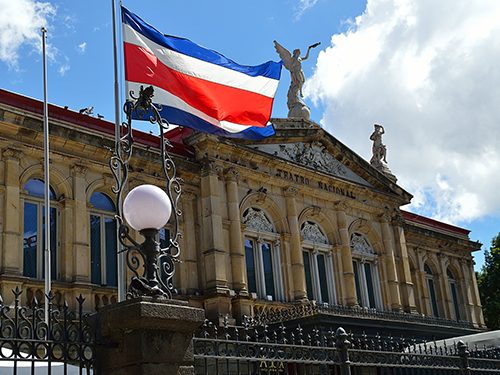 Legislators in Costa Rica are debating a measure that would permanently ban fossil fuel exploration and extraction, stopping a nascent pro-exploration lobby in its tracks and making it impossible for future governments to rescind the decision.

“To have small countries actually take the lead is very important, because those of us that are actually doing the right thing, we definitely punch above our weight,” former UN climate secretary Christiana Figueres told Reuters. “Just because Costa Rica is tiny, it doesn’t mean that we don’t have a voice.”

The country “started efforts to ban fossil fuel exploration in 2002 under President Abel Pacheco,” the news agency writes. “This ban was supposed to expire in 2014 but later extended until 2050. The new bill, backed by the administration of President Carlos Alvarado, would go further by permanently banning it.”

That degree of commitment would “prevent future governments from pivoting on the issue as the popular eco-tourism destination country aims to decarbonize by 2050,” Reuters adds.

“Our concern now is to remove the temptation, either today or at any time tomorrow, for there to be any current or future government who might think that returning to fossil fuels of the past century is actually a good idea for our country,” said Figueres, who traces her own “stubborn optimism” on the climate crisis back to her parents’ deep political involvement in their country.

A permanent ban would “send a powerful message to the world,” added lawmaker Paola Vega.

“A pro-exploration movement has been trying since 2019 to garner support for a referendum on oil and gas exploration but has failed to bring about a vote,” Reuters says. “The bill for a permanent fossil fuel ban has faced opposition by some politicians who argue that the resources could help the Central American country bounce back from an 8.7% dip in GDP in 2020 during the coronavirus pandemic.”

But the idea of building an economic recovery on fossil fuel extraction “makes absolutely no sense,” said Figueres, an architect of the 2015 Paris climate agreement, particularly because Costa Rica’s oil and gas reserves aren’t even commercially viable.

Moreover, “Costa Rica’s rich biodiversity draws international tourists to its jungles and coastal eco-resorts, and it is considered a global model on climate change initiatives,” Reuters writes. “It has never explored or extracted fossil fuels and gets 99% of its electricity from renewable sources, primarily hydropower, according to officials. The country of five million people aims to achieve net-zero carbon emissions by 2050.”