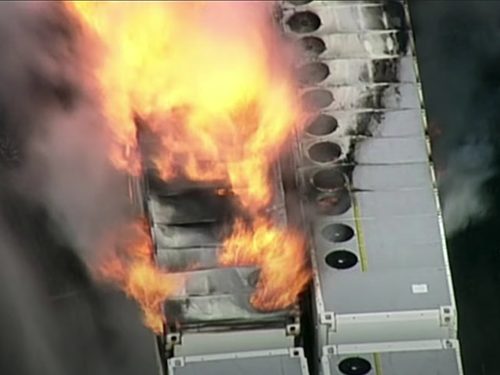 “The firefighters worked to extinguish the fire from the battery, which was in a shipping container, and prevent it from spreading to other batteries in the facility,” USA Today reports. The Australian Associated Press (AAP) says the battery bank caught fire while it was being installed, and the flames did spread to a second battery.

The fire was under control by Monday, with crews remaining on the scene for another 24 hours “as a precaution in case of reignition” and taking temperature readings every two hours, the Country Fire Authority said. “CFA incident controller Ian Beswicke said the fire had been particularly challenging due to the complex nature of the battery site,” AAP adds.

“This is the first Megapack fire that’s ever happened in the world, is our understanding,” Beswicke said. “They are difficult to fight because you can’t put water on the Megapacks…all that does is extend the length of time that the fire burns for.”

The recommended procedure, he explained, is to “cool everything around it so the fire can’t spread and you let it burn out.”

Tesla began developing its Megapack battery for utility-scale storage projects in 2019, USA Today says, with installations in Australia and at a PG&E project in California.

Now, multiple investigations have been launched by Energy Safe Australia, WorkSafe, the CFA, and police, just days after the 300-MW battery project owned by French renewable energy giant Neoen was certified by the Australian Energy Market Operator (AEMO). Neoen said no one was injured in the fire, and there was no impact on power supplies when the Big Battery was disconnected from the grid.

AEMO picked Tesla and Neoen last November to supply battery storage to ease transmission bottlenecks on Victoria’s increasingly renewable grid, Greentech Media reported at the time. Tesla’s history as a battery supplier to Australia dates back to 2017, when high-flying CEO Elon Musk promised what was then the world’s biggest grid-scale battery in 100 days.

That was after severe storms caused widespread blackouts in South Australia and then-prime minister Malcolm Turnbull wrongly blamed the incident on the state’s rapid adoption of solar and wind generation, rather than its increasingly unreliable coal plants.

“Tesla will get the system installed and working 100 days from contract signature or it is free,” Musk tweeted, in a conversation with Australian tech billionaire Mike Cannon-Brookes. “That serious enough for you?”