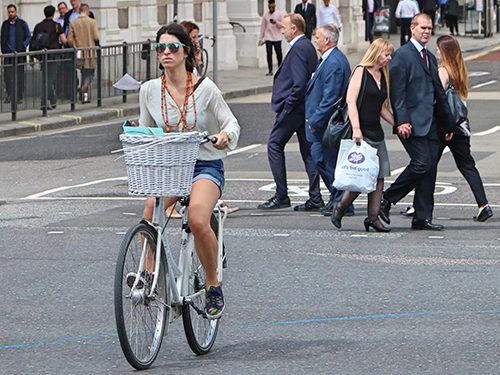 Realizing that Vision Zero safety initiatives are being hampered by patchy data, jurisdictions across the United States are using software programs and public outreach to fill in the gaps.

Illustrating the problems that lie in weak data, writes Bloomberg CityLab, is Washington, DC, where some 30% of collisions involving bicycles or pedestrians go unreported by police.

That data gap was uncovered by DC resident and data scientist Charlotte Jackson, who spent the spring listening to “six weeks of local 911 calls on the open-source police scanner website OpenMHZ.com and Pulsepoint, an app that tracks police and emergency responders.”

Her attention also revealed a sharp disparity between the ghosting of so many collisions that involve a bike or a pedestrian and the high levels of reporting for vehicle-only crashes. Only about 10% of auto incidents fail to show up on the Metropolitan Police Department’s official crash ledger.

More recent research by Jackson, this time using a public data dashboard she built with Theo Goetemann of analytics start-up Basil Labs, discovered that crashes involving bikes and pedestrians are even less likely to be reported in predominantly Black neighbourhoods in her city.

Connecting such silence to “the extremely high levels of distrust in police harboured in many Black communities,” Jackson testified to how such silence further harms these communities. “Those areas then may not receive the level of attention to safety that they should, perpetuating a lack of investments and disproportionate rates of traffic violence long seen in neighbourhoods of colour, which often lack street improvements like protected bike lanes and pedestrian infrastructure,” she said.

Jackson told CityLab that distinct correlation should be setting off alarms bells for policy-makers in DC—but without the data, there won’t be any alarms.

“When someone in Ward 7 submits a traffic safety request, the city will look at the statistics and make a decision on whether to act,” she said. “But the correct urgency just will not be there because nearly 40% of crashes never happened, as far as they are concerned.”

In an effort to redress the data gap, at least for safety initiatives like Vision Zero, Jackson and her data-savvy colleagues “have set up a software program that automatically scrapes emergency call data as well as data from Twitter and other sources to produce a daily count of reported versus unreported crashes.”

Other cities across the U.S. are also attempting to fill in their own data gaps. CityLab writes that San Francisco is working to combine police crash data with hospital cases, New York has installed telematics that “can detect and help reconstruct collisions” on city vehicles, and Philadelphia recently conducted “extensive public outreach to inform a recent Vision Zero strategy update instead of relying on numbers alone.”