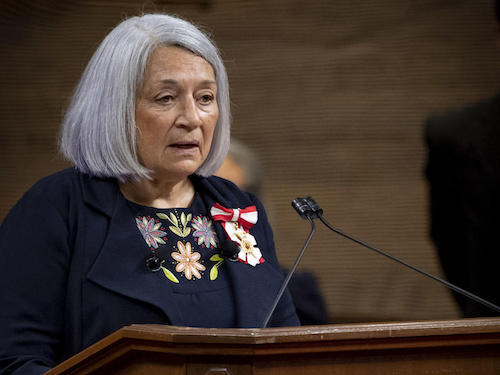 With the Centre Block of the Canadian Parliament under renovation, the Senate was meeting at the former Government Conference Centre in downtown Ottawa, on the very spot where Simon and other Indigenous leaders negotiated with then-prime minister Pierre Trudeau 39 years ago to enshrine their peoples’ rights in the Canadian Constitution, APTN National News reports.

“Where we gather today is of enormous significance to me,” Simon told participants. “That moment made this one possible.”

In a 21-minute address delivered in Inuktitut, English, and French, Simon stressed the impacts climate change is already having on Inuit communities across the Arctic, APTN says.

“Canada is an Arctic nation. Our Arctic is one of the most unique places on the planet—from spring geese to winter darkness, to some of the largest wildlife migrations anywhere on Earth. Our North is also a well-lived and lived-in homeland for Inuit, First Nations, and Métis people,” she said.

“For many years, Canada has experienced a disproportionate level of impact from climate change because the Arctic is warming faster than almost anywhere else on the planet,” she added. “The twin global crises of nature destruction and climate change are undoubtedly the challenge of our time. For evidence, we need only look at the Arctic, and what has happened this past month across the country: the devastating impacts of forest fires, prolonged droughts, record heat waves.”

Simon added that, “in order to have a healthy future, we must reset our thinking to understand that nature contains and creates our climate. Our climate allows society to be possible, and within our society is our economy.”

In her role as Canada’s 30th Governor General, Simon pledged she will “promote and recognize leading examples of community and Indigenous-driven conservation and of climate action” that can inspire “Canadians to do the same,” APTN writes.

She added that reconciliation between First Peoples and settlers in Canada “is a way of life and requires work every day. Reconciliation is getting to know one another.” To get that done, “our society must recognize together our moments of regret, alongside those that give us pride, because it creates space for healing, acceptance, and the rebuilding of trust.”