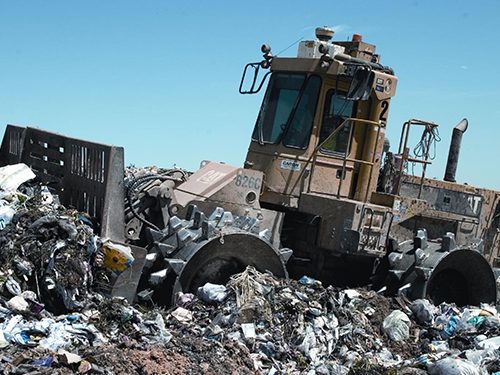 The release from the Natural Resources Defense Council warns of “significant health threats” from radioactive oilfield waste now “piling up at landfills across America—and in at least some documented cases leaching radioactivity through treatment plants and into waterways,” writes The Rolling Stone, which itself produced a “bombshell” report on the still largely invisible menace of fossil waste in January 2020.

Though the precise risks to public health remain uncertain, the study says the trillion gallons of brine generated by the fossil industry each year contain both carcinogenic radium and lead-210, a radioactive isotope of lead, along with numerous heavy metals. NRDC radiation health physicist and report co-author Bemnet Alemayehu told The Rolling Stone that toxicity leaves him “very concerned” for the health of anyone who comes into contact with the waste, especially given ongoing, pervasive ignorance about the risk.

“Bedrock federal environmental, health, and safety laws have gaping loopholes and exemptions that allow radioactive oil and gas materials to go virtually unregulated,” the NRDC report states. While some states are trying to fill the gap, none of their efforts “adequately protect health and the environment from this dangerous material.”

The regulatory failings at the federal level begin with the 1946 Atomic Energy Act, NRDC says, with its “notorious exemptions” for oilfield radioactivity. Then there is “the mother of all exemptions”, a set of amendments Resource Conservation and Recovery Act adopted in 1980, which label oilfield waste as non-hazardous. That was after the EPA found the waste contained multiple hazards, including uranium at “levels that exceed 100 times EPA’s health-based standards.”

While some states, including fracking-heavy North Dakota, have imposed a degree of regulation, those provisions are generally “so narrow as to be ineffective,” writes Rolling Stone, and often end up simply exporting the problem to other jurisdictions. For example, “between 2016 and 2019, some two million pounds of radioactive fracking waste from North Dakota ended up at a landfill in Oregon near the Columbia River.”

The fallout from lax laws can be profound, NRDC writes. “With both the federal government and state governments declining to adequately regulate the radioactive material in oil and gas waste, industry is often free to release this waste into surrounding communities, endangering human health and the environment with impunity.”

NRDC analyst Amy Mall, who has worked on oilfield waste for the past 15 years, said these “gaps and loopholes” amount to “subsidies or gifts to the industry that allow oil and gas production to appear cheaper than it actually is.” She added: “There is human harm from these exemptions, and there is an economic effect, as well.”

An American Petroleum Institute spokesperson assured The Rolling Stone that “health and safety is our industry’s top priority, and we take stringent and significant measures to protect our workers, the environment, and the communities where we live and operate.” They added that “natural gas and oil companies meet or exceed strict federal and state regulations, as well as undergo routine inspections to ensure that all materials are managed, stored, transported, and disposed of safely and responsibly.”

While the human health impact of oilfield waste “is still grossly under-studied,” The Rolling Stone says, research interest is accelerating rapidly, especially in the wake of the shale gas boom.

But meanwhile, Ohio legislators are pushing to expand the use of radioactive brine to de-ice roads in the state. Despite a Department of Natural Resources study confirming the presence of radium-226 in the brine “at levels well above Nuclear Regulatory Commission discharge limits,” a bill currently before an Ohio legislature committee aims to classify brine with radium levels up to 4,000 times above the EPA drinking water standard as a commodity, allowing it to be sold legally for de-icing.