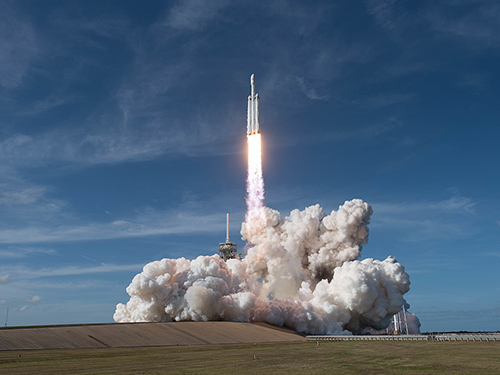 The recent space flights of billionaires Jeff Bezos and Richard Branson were a display of the disproportionate social and environmental impacts of the ultra-rich, say voices from all corners of the political and media landscape.

“Is anyone else alarmed that billionaires are having their own private space race while record-breaking heat waves are sparking a ‘fire-breathing dragon of clouds’ and cooking sea creatures to death in their shells?” tweeted Robert Reich, former United States Secretary of Labor, on July 8.

Others point to the environmental damages caused by space flights, which each pack a wallop of emissions. A single rocket launch can contribute four to 10 times more nitrous oxide than the largest thermal power plant in the United Kingdom, says Eloise Marais, Associate Professor in Physical Geography at University College London, writing in The Conversation. And the per capita CO2 footprint for space tourists will be 50 to 100 times more than that of the average passenger on a long-haul plane flight.

Each of these fuels contributes its own blend of greenhouse gases and air pollutants, including water vapour, carbon dioxide, nitrous oxides, soot, and various other compounds. Roughly two-thirds of the exhaust will be released into the atmosphere, where it will linger for two to three years, says Marais.

In addition to the environmental concerns, the flights occur at a time of stark inequality and economic hardship. Bezos’s now widely-shared statement thanking “every Amazon employee and every Amazon customer, because you paid for all of this” has received backlash as critics point out that Amazon’s workers are widely considered exploited and underpaid, reports NBC News.

U.S. Representative Alexandria Ocasio-Cortez (D-NY) tweeted that Amazon workers paid for Bezos’s space jaunt “with lower wages, union busting, a frenzied and inhumane workplace, and delivery drivers not having health insurance during a pandemic.” NBC writes that Amazon workplaces have a serious injury rate that’s twice the national average, often lack air conditioning, and demand a frantic work pace with few breaks, sometimes compelling employees to urinate in bottles and defecate in bags. Workers say Amazon’s US$15 per hour wage, while above the U.S. legal minimum, is not in proportion to the value they produce.

“Jeff Bezos is going to space today,” tweeted @YoungFunE. “If any Amazon workers have to use the bathroom, now’s the time.”

Supporters of the space ventures say the entire population benefits from the trickle-down advancement in space technology generated by space tourism, notes CBC. Some argue that Bezos, Branson, and Musk are filling a space research gap that deepened when President Barack Obama determined that it was no longer feasible for NASA to pursue the full range of space ambitions without private sector involvement.

While he recognizes such contributions from this year’s space-bound billionaires, U.S. Representative Earl Blumenauer (D-OR), a senior member of the House Ways and Means Committee and co-chair of the bipartisan Congressional Bike Caucus, is pitching a tax measure, the Secure Protections Against Carbon Emissions (SPACE) Tax Act, to balance the negative social and environmental impacts of the jaunts, reports Seattle’s Live5News.

“Just as normal Americans pay taxes when they buy airline tickets, billionaires who fly into space to produce nothing of scientific value should do the same, and then some,” he said July 20, the day of Bezos’s launch. At the heart of his concern, Blumenauer said, is a worry that average citizens won’t see any public benefit as they bear the environmental costs of recreational space travel for the rich.

“Am I supposed to be impressed that a billionaire went to space while he’s paid zero in federal income taxes some years and the workers at his company struggle to afford their medical bills, rent, and food for their kids?” tweeted Sen. Bernie Sanders (I-VT). “Nope. It’s time to invest in working people here on Earth.”