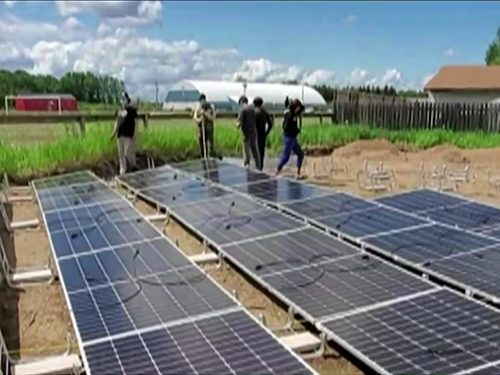 “We want them to learn about solar energy and, you know, possibly some of our students will look at careers in this sector,” Mayor Duane Favel of Île-à-la-Crosse told APTN News (see the 20-minute mark for the story).

Students at Rossignol High School in Île-à-la-Crosse installed solar panels to power a greenhouse on the school grounds with the help of W Dusk Energy Group, a Vancouver-based, Indigenous-owned energy and community development company. Company President David Isaac, a member of the Mi’kmaq Nation, told APTN the project “instantly modernizes” the town, saying that while the community already has good infrastructure, “this is just a continuation of really what the overall long-term vision is happening here in Île-à-la-Crosse.”

The high school project—part of a larger plan to incorporate more solar power into the community—is intended to eventually provide an accredited program for students. Favel added that produce from the greenhouse will help maintain tradition while supporting food security for Île-à-la-Crosse residents.

A similar project is under way in Cowessess First Nation, where more than 800 solar panels have been installed as part of the Community Building Solar Project, writes CBC News. The panels were switched on last Tuesday, July 13.

Calgary-based SkyFire Energy led community members in constructing the panels, which will generate enough energy to power more than 60 homes and save about C$20,000 per year, which will be used to support underfunded youth and senior programs.

Chief Cadmus Delorme said the project will have “ripple effects” on the education of young people in the Cowessess community. “Now that our kids get to see this, we’re now looking to prepare them for science and engineering,” he told CBC. “This is our contribution to getting them excited about what they’re going to do in university.”

Cadmus also sees the project as an opportunity to help the community heal following the recent discovery of 751 unmarked graves on the former site of the Marieval Indian Residential School.

Both community leaders saw the solar projects aligning with their communities’ culture and traditions. Favel said adding solar to the greenhouse combined traditional with modern ways, while Delorme cast the solar fields as a way for the community to honour its ancestors and land. In an earlier report, Isaac added that “renewable energy re-establishes our relationship with the land in a more harmonic and a more fitting way that our ancestors would choose.”