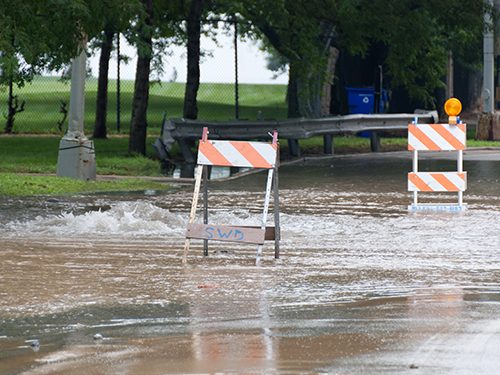 As climate change wreaks havoc with the world’s water cycles, Chicago and Detroit are facing a serious reckoning with their engineering—and social—underpinnings.

If one were looking for “a big-city refuge from climate change,” Chicago might seem “an excellent option,” located far from rising sea levels yet rich in supplies of fresh Great Lakes water, writes the New York Times.

But things are not as they would seem from a casual look at a map. Chicago’s very proximity to Lake Michigan, coupled with the impacts of the climate crisis on local water cycles, is proving the city to be no refuge at all.

“Chicago has a weakness at its very foundations,” the Times explains. “The towering skyscrapers and temples of commerce were built upon a swamp.” But the local belief that this tiny “dip in a continental divide that separates two vast watersheds: the Great Lakes and the Mississippi River Basin” will remain drained and dry is “built on a shaky prospect”—that the land will continue to stay stable.

As Chicago’s foreshore erodes and water levels swing wildly in the face of climate-driven storms and surges, many of the city’s 9.5 million residents are starting to realize they are nowhere near safe. Also very much a concern: the well-being of people and aquatic ecosystems in the face of increasing stress on the city’s sewage and waste water treatment systems.

Illustrating the frightening roller-coaster between wet and dry that Chicago is now riding, the Times describes how Lake Michigan levels “swung more than six feet” between 2013 and 2020, plummeting “to a low not seen since record-keeping began in the mid-1800s” only to hurtle back up to a record summer high, then crash again in the face of drought.

“The speed and uncertainty of the changes underscore how Chicago, in some crucial ways, is perhaps more immediately exposed to the dangers of global warming than cities on the ocean,” writes the Times. “At least ocean levels change relatively slowly and predictably (storm surges notwithstanding) and move in just one direction: up.”

Add brutally cold winters driven by the weakening polar vortex—bringing home- and port-damaging ice surges—and the consequences could be “dire,” notes the Times. On May 17, 2020, a biblical deluge of rain walloped the City of Big Shoulders and caused reservoirs and sewage systems to overflow.

Detroit is also in a fight for its precarious existence against its own inland sea. But as one of the poorest big cities in the United States, writes Grist, its battle is very different from Chicago’s.

After being pounded by six inches of rain in five hours (double June’s average rainfall for the entire month), Detroit experienced a “500-year” flood that was “distressingly” similar to the one that caused US$1.8 billion in damages just seven years ago. While the latest damages have yet to be assessed, Grist outlines the considerable economic, personal, and environmental toll, beginning with the nearly 10 billion gallons of sewer water that went into nearby waterways.

Citing an unpublished study by researchers at the University of Michigan and Wayne State University, Grist notes that “primarily African-American neighbourhoods are at risk” to the climate impacts in Detroit. While the state has proposed $238 million for stormwater upgrades through Governor Gretchen Whitmer’s 2020 Michigan Clean Water Plan, the funding is just a fraction of what is needed.

“It would cost $1 billion each year until 2045 to sufficiently shore up stormwater drainage infrastructure, and in just seven of Michigan’s 83 counties,” writes Grist, citing an estimate by the Southeast Michigan Council of Governments.

Activists are calling for more funding—and for a more equitable approach to a solution—with Michelle Martinez, executive director of the Michigan Environmental Justice Coalition, drawing a direct line between the recent flooding and systemic racial injustice.

“This incident is not just about a flooded basement,” she  wrote. “It’s about three generations of disinvestment in the infrastructure that supports our homes and schools, family businesses, and houses of worship; compounded by racist policies like redlining and blockbusting.”