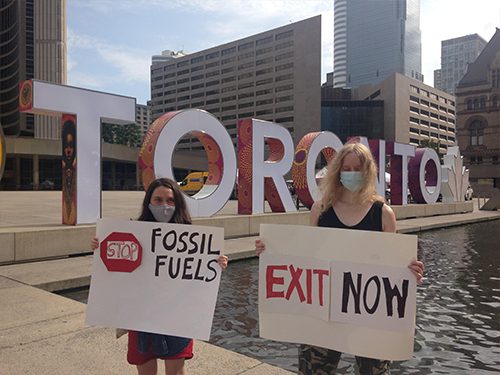 “We made history!!” trumpeted ClimateFast, the local campaign group that had spent the last month promoting the non-proliferation treaty motion, gathering more than 1,000 petition signatures along with Fridays for Future Toronto, Mobilize TO, and Seniors for Climate Action Now!. Canada’s largest city became its second to endorse the treaty; Vancouver was the first in the world to back the global treaty initiative last year.

A day earlier, councillors adopted a new green standard that will reduce emissions in buildings and transportation, as well as a net-zero standard for existing buildings. The new rules put Toronto “on a solid path to a net-zero future,” The Atmospheric Fund writes, after “dozens of community members including TAF, building industry representatives, architects, climate activists, and youth groups showed support for both policies through letters and deputations.”

Local elected officials had lots to say about both initiatives.

“We have seen fires, floods, murderous heat, and yet governments continue to ignore the immediacy of the climate crisis,” said Councillor Mike Layton (Ward 11, University-Rosedale), who co-sponsored the treaty motion. “Ignorance at this point should be impossible,” and “our youth and future generations have the most to lose from a lack of immediate action to stop fossil fuel expansion.” So “I am happy to have Council endorse the Treaty and look forward to a greener, healthier future.”

“By endorsing the Fossil Fuel Non-Proliferation Treaty, Toronto joins a network of cities globally in advancing our climate goals,” said co-sponsor Councillor Shelley Carroll (Ward 17, Don Valley North). “The effect of climate change is no longer in the distant future and more must be done to reduce carbon emissions quickly. This endorsement reiterates our commitment to an equitable and green post-pandemic recovery.”

Mayor John Tory covered some of the same ground in his response to the two energy retrofit programs. “With temperature records shattered in Canada in recent weeks, it’s critical that we reduce community-wide emissions to net-zero as soon as possible,” he said. “While the challenges of transforming how we build, renovate, and operate our homes and buildings are massive, so too will be the benefits in terms of our climate, our health, economy, and resilience.”

The Fossil Fuel Non-Proliferation Treaty takes aim at the 80% of global greenhouse gas emissions produced by oil, gas, and coal. In April, the treaty was endorsed by 101 Nobel laureates ahead of U.S. President Joe Biden’s Leaders’ Summit on Climate.

“No city, province, or country can make this energy transition alone,” FFNPT Initiative Chair Tzeporah Berman said in a release. “Sadly, the great work that is being done locally in Toronto is being undermined by higher levels of government. Global cooperation is needed to backstop local efforts to reduce GHG emissions quickly.”

The Toronto Green Standard Version 4 will eliminate nearly two million tonnes of emissions from buildings by 2050, while requiring electric vehicle charging and active transportation infrastructure in all new structures, the TAF release states. Under the new strategy for existing buildings, the city will begin phasing in mandatory emissions performance standards in 2025, a move that will create the equivalent of 7,000 full-time jobs over 30 years.

“Extreme heat is already causing an average of 120 premature deaths [in the city] annually, and this number is expected to double by 2050 without strong action,” TAF writes. “Retrofit measures such as improving building envelopes and installing heat pumps greatly reduce exposure to extreme heat and will ensure Torontonians are safe during increasingly frequent and severe heat waves.”