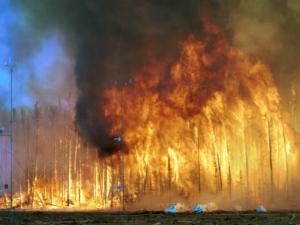 As much of Canada continues to bake under fierce heat, northwestern Ontario communities are calling out the provincial government’s failure to prepare for wildfire season.

With much of the northwest now under a provincial emergency order, “calls are growing for more support to keep community members safe as over 90 forest fires continue to burn across the region,” reports CBC News. At the time of the order, partial evacuations of the most vulnerable residents from three First Nations and one municipality had already begun.NDP MPP Sol Mamakwa, a member of the Kingfisher First Nation who represents the northern Ontario riding of Kiiwetinoong, urged Ontario government to act to protect and support his constituents—and fast.

“Doug Ford should have taken action long ago with fire preparations knowing that forest fires would be raging across northwestern Ontario during the fire season,” Mamakwa said in a release. “His lack of readiness has left people in danger and unsupported.”

Pikangikum First Nation Chief Dean Owen called the evacuation “a race against time,” warning that the efforts were being complicated by having so many evacuating communities “competing for limited resources and space.”Located about 100 kilometres northwest of Red Lake, where two wildfires have been raging—and recently merged to form one massive blaze—Pikangikum declared its own state of emergency Monday night and began organizing an evacuation for 500 to 800 of its most vulnerable citizens.

This is the third time in as many years the community has been forced to flee in the face of wildfire and smoke, CBC says. More than 3,000 people call the community home.The evacuations and alerts in the face of the Red Lake fire come just days after nearby Poplar Hill First Nation issued a community-wide evacuation order. Deer Lake First Nation, 180 kilometres north of Red Lake, is also evacuating its most vulnerable residents, and CBC says “a number of other First Nations are on high alert.”

Extreme heat and below-average precipitation is leading to feed and water supply shortages that are jeopardizing the viability of Saskatchewan livestock producers,” said the Agricultural Producers Association of Saskatchewan in a release. “(APAS) is requesting immediate government assistance to help producers cope with these extreme conditions.”