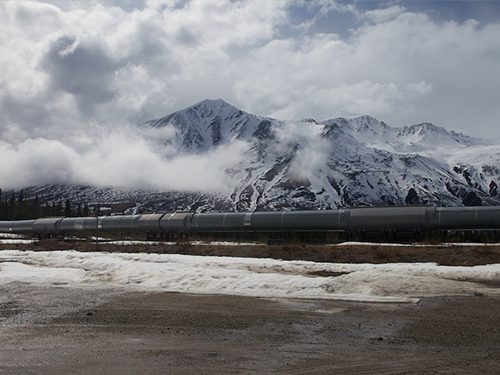 Melting permafrost is causing the structural supports for the Trans-Alaskan Pipeline—one of the world’s largest—to buckle, raising concerns for the delicate and remote ecosystem through which it passes.

“The slope of permafrost where a 247-metre section of pipeline is secured has started to shift as it thaws, causing several of the braces holding up the pipeline to tilt and bend,” writes Inside Climate News, citing analysis by the Alaska Department of Natural Resources. The pipeline is 48 inches in diameter and “flows with an average of 20 million gallons of oil a day.”

To remedy this alarming “slope creep,” the Department has approved “the use of about 100 thermosyphons—tubes that suck heat out of permafrost—to keep the frozen slope in place and prevent further damage to the pipeline’s support structure.”

Inside Climate affirms the “obvious irony” of deploying technology to keep the permafrost frozen below a pipeline that pumps oil. Alaska is “heating up twice as fast as the global average, which is driving the thawing of permafrost that the oil industry must keep frozen to maintain the infrastructure that allows it to extract more of the fossil fuels that cause the warming,” the publication states.

Carl Weimer, a special projects advisor for the Bellingham, Washington-based Pipeline Safety Trust, called the incident “a wake-up call” that should catalyze serious discussions between regulators and industry about how best to safeguard fossil infrastructure against the climate crisis. Alaska has warmed by almost 2°C in the past few decades, and will warm by as much or more than that again by the middle of the century.

“With every 1.1°C increase in temperature, 3.9 million square kilometres of permafrost could be lost to thawing,” Inside Climate writes.