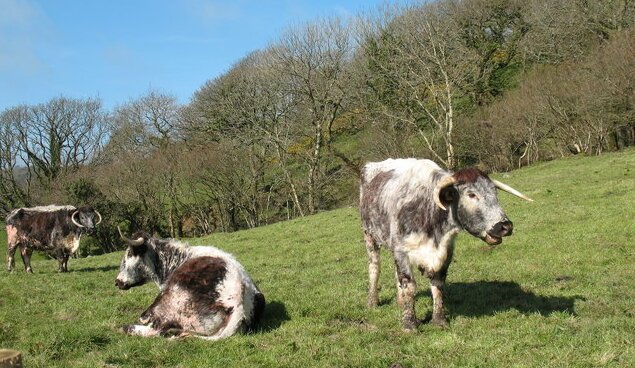 Meat and dairy products come at a rising price to the planet. Image: By Gordon Hatton / Longhorn Cattle

Lobbyists are trying to downplay livestock’s harmful climate impact, which adds large amounts of methane to the atmosphere.

DUBLIN, 13 July, 2021 − A summer’s day, the sky is blue and the cattle are quietly meandering about in the meadow, grazing on lush grass. But this idyllic country scene hides a serious problem: livestock’s harmful climate impact.

The flatulence of cattle results in enormous amounts of methane, one of the most potent climate-changing greenhouse gases (GHGs), being released into the atmosphere. And these emissions, which contribute to the danger of global warming on a catastrophic scale, are growing.

According to the latest report on the worldwide outlook for agriculture by the Organisation for Economic Co-operation and Development (OECD), global carbon emissions from the sector are set to rise by 4% over the next 10 years, mostly as a result of expanding livestock production.

Buoyed by rising meat and dairy demand from what are referred to as middle income countries such as China, farmers are increasing the size of their herds. Giant meat and dairy companies, which farm cattle on an industrial scale, are also upping production.

Livestock – a large proportion of them cattle – are responsible for an estimated 14% of the total annual amount of greenhouse gases discharged worldwide.

“The industry has been borrowing tactics from the fossil fuel playbook”

Here in Ireland – a country which entices tourists with images of its green, pastoral environment – there are seven million cattle, with the country’s dairy herd increasing in size by almost 30% over the past six years.

The OECD says the adoption of new greener technologies across the world’s agricultural sector means that emissions per unit of output – the carbon intensity of production – will decrease significantly in coming years. But a big expansion in livestock production would wipe out those benefits.

“Thus, additional policy effort will be needed for the agricultural sector to effectively contribute to the global reduction in GHG emissions as set in the Paris Agreement,” says the OECD.

Bringing about changes in agricultural policies – whether in Ireland or elsewhere – is a tough task. Farming organisations and lobby groups wield considerable political and financial clout, particularly in countries such as Ireland where agriculture plays a big role in the economy.

Other powerful forces are at work. Jennifer Jacquet is an assistant professor in the Department of Environmental Studies at New York University who has studied the lobbying methods of the big US meat and dairy companies.

Writing in the Washington Post, Jacquet says the giants of the livestock industry have been seeking to call into question the dangers of global warming.

“Since at least 2006, when the UN’s Food and Agriculture Organization  published a report, Livestock’s Long Shadow, cataloguing the sector’s global environmental impacts, the industry has been borrowing tactics from the fossil fuel playbook,” says Jacquet.

“While meat and dairy producers have not claimed that climate change is a liberal hoax, as oil and gas producers did starting in the 1990s, companies have been downplaying the industry’s environmental footprint and undermining climate policy.”

The political and financial lobbying efforts of “big meat” in the US have been successful, particularly among Republican Party officials.

Calls to eat less meat were, said a Republican governor, “a direct attack on our way of life”. Another Republican official had a blunt warming for those seeking to downsize the livestock industry. “Stay out of my kitchen”, he said. − Climate News Network