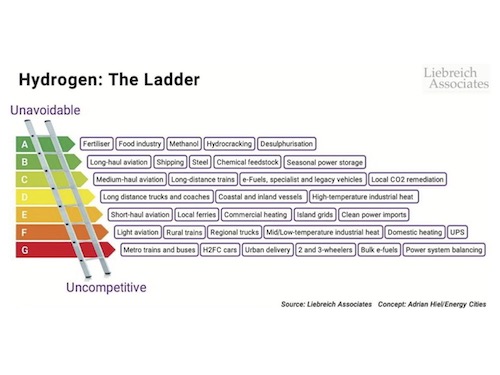 Fossil fuel companies are happy to hype “uncompetitive” uses of hydrogen in cars and home heating if it means delaying the shift to electric vehicles and heat pumps that are practical and affordable, Bloomberg New Energy Finance founder Michael Liebreich said in a recent interview.

“If you’re an oil and gas company, in a way, talking about hydrogen is kind of a two-way bet because if it works, then you’re embedded in the hydrogen industry—but if it doesn’t work, you’ve delayed the transition to the thing you don’t make, which is electricity,” Liebreich told Recharge News. “At worst it creates confusion, which is great [for them]. And these companies have an interest in this [electrification] stuff not moving too fast, I’m afraid—for all their good words.”

Liebreich points to a “ladder” of about three dozen potential uses for hydrogen, from “unavoidable” options like fertilizers, hydrocracking, desulphurization, and methanol production to “uncompetitive” notions like hydrogen-powered cars, buses, and urban delivery. Hydrogen to replace battery-electric vehicles and heat pumps falls on the uncompetitive side of the scale, Recharge says.

“Liebreich—a pro-business supporter of the UK Conservative Party, who sits on the British government board of trade and is also an advisor to Norwegian oil giant Equinor—believes that oil and gas companies know that hydrogen is a poor choice for these two segments, but are pursuing them nonetheless,” the UK-based publication writes.

While colossal fossil Royal Dutch Shell is happy to spend US$12 billion on a floating liquefied natural gas (LNG) platform that has run into a series of operational problems, “they won’t spend $12 billion just producing blue, green, pink, or any other sort of clean hydrogen” for existing uses that make sense, he told Recharge. “I don’t know whether it’s disingenuity or a phony war, but we’re talking at cross purposes if we’re using dirty hydrogen” for present-day purposes while touting hydrogen cars.

Recharge gets into detail on arguments against hydrogen cars and heating that range from the laws of physics to basic economics.

“If you look at the cars and you look at the competitive dimensions, basically, electric wins on everything…sometimes by large margins,” Liebreich said. “Nought to 60 in four seconds versus nine seconds, being able to fold the seats down and put loads of luggage in versus no, sorry, there’s a hydrogen cylinder in there.” EVs are also “three times as efficient. And by the way, hydrogen [cars] don’t win on weight, they tend to be heavier, so they don’t even have that.”