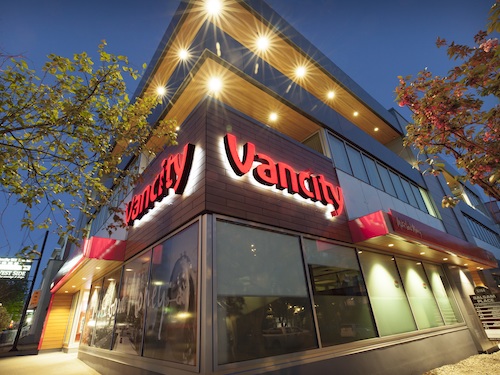 With Canada’s banks under heightened scrutiny for the “financed emissions” they drive with their loans and investments, the Vancity Credit Union is out with a public disclosure report that shows where the 75-year-old co-operative is leading other financial institutions—even though management is taking the report as a roadmap for further carbon reductions.

The disclosure statement points to commercial mortgages as Vancity’s biggest source of financed emissions, and car loans as the category with the highest emissions per dollar. But the big takeaway, Vancity said in a release, is that its financing accounts for 36 times more emissions than its in-house operations—when the average difference across the banking sector is closer to 700-fold, according to an April, 2021 report from the Carbon Disclosure Project (CDP).

It helps that Vancity stays clear of Canada’s highest-emitting industry. “While many financial institutions must contend with emissions from fossil fuels, Vancity does not lend or directly invest in that sector,” the co-op said.

By contrast, 60 of the world’s biggest global banks lent US$3.8 trillion to fossil fuel projects in the five years after the Paris climate agreement was signed, according to this year’s Banking on Climate Chaos report by Oil Change International, Rainforest Action Network, BankTrack, the Indigenous Environmental Network, Reclaim Finance, and the U.S. Sierra Club. That included US$160 billion/C$208 billion from the Royal Bank of Canada, which the report singled out for the “dubious honour of punching above its weight” on fossil financing.

“As a sector, financial institutions decide which organizations, initiatives, and activities receive funds through loans and investments—and this makes them critical in the global fight against the climate crisis and the transition towards a low-carbon economy,” the report states. “To create effective net-zero strategies and to develop innovative climate-related financial products, it’s imperative that financial institutions credibly measure and transparently disclose the emissions enabled by their financing and investment, and underwriting.”

Vancity CEO Christine Bergeron traced some of the stark difference in Vancity’s performance back to the expectations its members have always brought to the organization.

“They’re interested in more than just the financial services they receive,” she told The Energy Mix in an interview late last month. “They are motivated by the environmental outcomes that they and their money have in the world. We know this.”

While other financial institutions may be sensitive to their customers’ priorities, “we have member demand,” she said. “There’s the reputation and trust we have in the community, and people expect us to do the right thing.”

But that approach also supports Vancity’s business objectives. “We’ve seen the performance from an investment perspective, especially over the last few years,” and “I believe there are very significant opportunities as we rethink the sector,” Bergeron said. “We’re going to need to make the transition, we’ll have to think about how we do things differently, and as much as there’s risk, there’s also significant opportunity.”

In contrast to many businesses that think of climate disclosure as a matter of compliance—of ticking the box—Vancity’s release presented it as a matter of learning and situational awareness. “If we can understand our portfolio, others can understand it, as well,” Bergeron told The Mix. So “we don’t think of it as compliance. We do think transparency and accountability will matter a great deal for Canada to get to net-zero targets.”

So while “public disclosure does ensure an accountability that hopefully will prevent organizations from making essentially empty commitments,” it also helps a financial institution measure its own climate performance, for better and for worse.

“It helps you understand where to focus your energies for the larger outcome,” she said. “Once you know the intensity of the emissions in different areas, you can see the risk, returns, and the resources required to think about these things. Then you can focus your effort on solutions, and that will lead to more action” that others in the sector can observe and learn from.

Climate advocates know that progress in Canada’s financial sector has been slow. In a feature interview last fall, Shift:Action Director Adam Scott told The Mix that some lenders consider it “really impolite in Canadian financial circles to say anything critical of fossil fuels.”

But Bergeron says she’s seen “a growing recognition on everyone’s part that action is needed. There’s been a growing understanding that we have a role to play and time is of the essence.”

Speaking from Vancouver on a day when the heat was shattering all-time records, air quality was poor, and the summer season hadn’t even begun yet, she added that “our climate is changing now. Individuals are experiencing it first-hand. And there’s certainly a broader awareness that is translating into consumer demand on the financial community.”