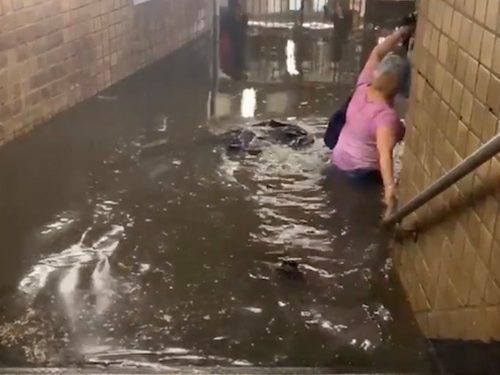 Subway riders slogged through waist-deep water and more than a dozen people had to be rescued from a flooded stretch of highway Thursday as Tropical Storm Elsa brought heavy rains and winds up to 50 miles per hour to New York, New Jersey, and Connecticut.

In New York City, “videos posted on Twitter showed several subway stations taking on water—some from above, some from below,” the Times writes. “The No. 1 station at Broadway and 157th Street in Manhattan appeared to suffer the most dire effects of the storm, with some passengers opting to wade through filthy water on their way to the platform.”

“Some subway system ya got there,” @PaulleeWR tweeted at Mayor Bill de Blasio, with an attached eight-second video. “This is the 157th St. 1 line right now.”

Sarah Feinberg, the interim president of New York City Transit, tweeted that crews were “working hard and fast” and attributed the problem to “a confluence of factors: underground drains being overwhelmed by the ferocity of the rain; vents and stairways serving as conduits for the same reason; and street-level flooding spilling over curbs and down into the subway,” the Times says.

“What was different about this storm was that we got pounded by rain in places that don’t typically flood,” she added.

Eric Adams, the newly-confirmed Democratic candidate in this year’s New York mayoralty race, criticized Feinberg’s agency in his own tweet.

“This is what happens,” he said, when an agency “makes bad spending decisions for decades. We need congestion pricing $ ASAP to protect stations from street flooding, elevate entrances, and add green infrastructure to absorb flash storm runoff. This cannot be New York.”