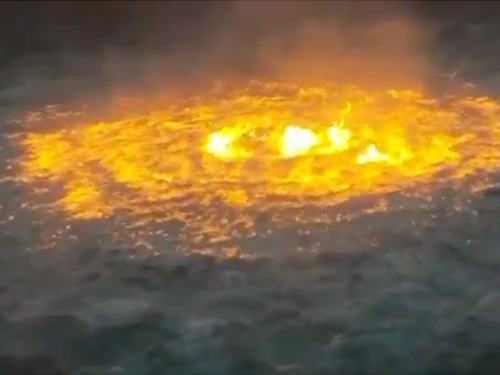 Environmentalists criticized Mexico’s state-owned oil company Saturday after a gas leak at an underwater pipeline unleashed a subaquatic fireball that appeared to boil the waters of the Gulf of Mexico.

Greenpeace Mexico said the accident Friday appeared to have been caused by the failure of an underwater valve and that it illustrates the dangers of Mexico policy of promoting fossil fuels, The Associated Press reports, in a dispatch republished by CP.

President Andrés Manuel López Obrador has bet heavily on drilling more wells and buying or building oil refineries. He touts oil as “the best business in the world.”

Greenpeace wrote in a statement that the fire, which took five hours to extinguish, “demonstrates the serious risks that Mexico’s fossil fuel model poses for the environment and people’s safety.”

“Meanwhile the people in power call themselves ‘climate leaders’ as they open up new oilfields, pipelines and coal power plants— granting new oil licences exploring future oil drilling sites,” Thunberg wrote. “This is the world they are leaving for us.”

And Thunberg wasn’t the only one to react.

“You know what doesn’t set the ocean on fire? Anything but oil!” tweeted @hounddog5.

“Funny, you hardly ever have damage from a solar spill. We have to end our addiction to fossil fuels and move to sustainable energy sources!” added @MelisCattish.

Mexico’s state-owned oil company said Friday that an undersea gas pipeline ruptured near a drilling platform in the Gulf.

Pemex, as the company is known, said nobody was injured in the incident in the offshore Ku-Maloob-Zaap field.

The leak near dawn Friday occurred about 150 yards (135 metres) from a drilling platform. The company said it had brought the gas leak under control about five hours later.

It was unclear how much environmental damage the gas leak and oceanic fireball had caused.