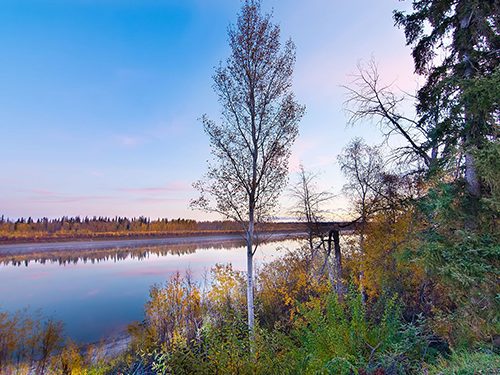 The Blueberry River First Nations will be able to limit development in a key natural gas fracking region in northeastern British Columbia, after the B.C. Supreme Court ruled the province violated Treaty 8 with the amount of industrial development it had permitted in the area.

The ruling Thursday “could have sweeping implications for oil, gas, forestry, and hydroelectric development in the northeastern part of the province,” The Narwhal reports.

“The court ruling is expected to be watched by other First Nations in northern B.C. that are also seeking to halt industrial development in their territories, and by oil and gas companies hoping to further develop the region,” the Globe and Mail writes.

“The province’s mechanisms for assessing and taking into account cumulative effects are lacking and have contributed to the breach of its obligations under Treaty 8,” Justice Emily Burke wrote in her ruling. “The evidence shows that the province has not only been remiss in addressing cumulative effects and the impacts of development on treaty rights, but that it has been actively encouraging the aggressive development of the Blueberry Claim Area through specific royalty programs (including for marginal wells) and Jobs Plan policies.”

The overall impact prevents the community from meaningfully exercise its treaty rights, the ruling states.

“Blueberry’s knowledge and its ability to successfully hunt, trap, fish, and gather depends on the health and relative stability of the environment,” Burke wrote. “If forests are cut, or critical habitat destroyed, it is not as simple as finding another place to hunt. The Dane-zaa have located these places over generations.”

In a published statement, Chief Marvin Yahey declared the ruling an important victory.

“For years, Blueberry members have witnessed the destruction of our territory by provincial policies that actively support and promote industrial development at the expense of our way of life,” he said. Now, “we celebrate the framework and path forward for our Nation and the territory that is so central to our past and future.”

The “confirmation from the Court after all the years we have been raising our concerns with the Crown is a very important recognition of our people, our culture, and our way of life,” he added.

“Treaty 8, signed in 1899, gave the government the right to approve development in the expansive territory, but guaranteed signatories access to traditional ways of life such as hunting, fishing, and trapping,” the Globe explains. The community argued those rights had been worn away by successive project approvals—including two hydroelectric dams, and the 1,100-megawatt Site C megaproject now under construction.

In 2016, the David Suzuki Foundation and Ecotrust Canada published an Atlas of Cumulative Landscape Disturbance [pdf] that documented the extent of oil and gas activity, hydropower, forestry, mining, transmission lines, seismic lines, roads, agriculture, and wind power activities in the area. It concluded that 73% of the Nations’ traditional territory was within 250 kilometres of an industrial disturbance, 84% was within 500 metres, and remaining intact forest covered only 14% of the territory.

In 2019, Blueberry River’s chief and council said nearly three-quarters of its population lived within 250 metres of industrial infrastructure, and that people were afraid to drink the water.

The community originally filed its lawsuit in March 2015, The Narwhal says. Last week, the judge said she was prepared to suspend her ruling for six months “while the parties expeditiously negotiate changes to the regulatory regime that recognize and respect Treaty Rights.”

Blueberry River legal counsel Maegen Giltrow said that provision reflected “a recognition that this is a whole-scale change” and that “the parties have got to start working diligently to find ways to honour the Treaty Rights. If it doesn’t happen within six months, the hard stop is there.”

The Narwhal has more reaction to the court decision.