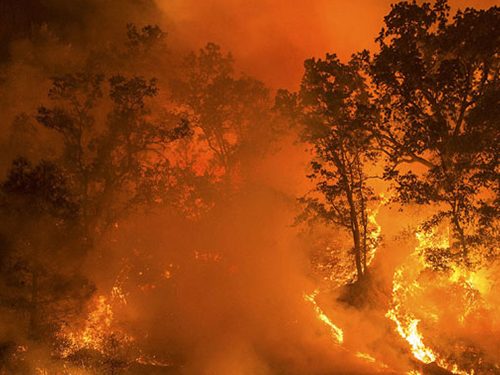 People in rural Oregon are living through serious distress and trauma, in their case as a result of record drought an horrific local wildfires. Bob Doppelt, coordinator of the International Transformational Resilience Coalition, originally published this account on Undark.

It was 80°F outside in Oregon’s Southern Willamette Valley, the record drought continued, and a red flag warning had been issued to alert residents to beware of wildfires. No, it was not autumn, when wildfire season has historically occurred in the region. It was April 16, when it should have still been cool and pouring rain outside. The surprising wildfire warning seemed to have everyone on edge, fearful about what might happen to them, their families, and neighbours then and later in the year.

Just the past September, the historic Holiday Farm wildfire had completely incinerated the small town of Blue River and destroyed at least 430 homes and over 20 commercial sites in the McKenzie River Valley. The numerous wildfires burning throughout the state at the time made Oregon’s air quality the worst in the world, triggering “very unhealthy” air quality alerts. Residents were urged to stay indoors to prevent respiratory problems.

Afterward, a number of residents living in or close to the McKenzie Valley reported severe anxiety, depression, and other mental health problems. Research suggests that as many as 30% of first responders, like those who fought the Oregon wildfires, develop behavioural health issues, including post-traumatic stress disorder, or PTSD. Ordinary civilians were also greatly distressed. “It’s kind of hard to have good mental health days when your world is, literally, on fire,” one Oregon resident told NBC News.

The frightening events occurring in Oregon mirror the disruptions to the global climate system, regional weather patterns, and ecological systems happening across the United States and worldwide.

On Earth Day, a week after the red flag warning in Oregon, President Joe Biden boldly committed the U.S. to slashing greenhouse gas emissions by 50% from 2005 levels by 2030. Although much needed, the pledge is coming very late in the game and, even if successful, will not prevent serious impacts to the planet and society. Therefore, I and the six cosignatories of this letter—all of us mental health professionals—urge the U.S., as it aggressively cuts emissions, to make an equally bold commitment to build population-level, or universal capacity for mental wellness and resilience with respect to the impacts of the climate emergency. This will require expanding our mental health system to more actively engage community members both in preventing large-scale traumas and in healing from them when they do occur. Both will be necessary to avoid the devastating mental health and psychosocial problems that climate change will engender.

The COVID-19 pandemic offers just a tiny preview of some of the mental health and psychosocial consequences of the climate emergency. Like the pandemic, climate change will cause cascading disruptions in the ecological, social, and economic systems people rely on for food, water, jobs, incomes, shelter, health, safety, and other basic needs. No one will be immune from the incessant pileups of the often-toxic stresses that will result.

Those stresses will be compounded by more frequent, extreme, and prolonged storms, wildfires, heat waves, floods, droughts, and other disasters. Extreme climate conditions already impact more than 47 million Americans every year, and many of those who are directly affected may be severely traumatized as a result. Last year Oak Ridge National Laboratory, a science and technology research centre sponsored by the U.S. Department of Energy, projected that the number of Americans impacted by these conditions could double by 2050, implying that a third or more of the population will be stricken every year.

Left unaddressed, the combination of cascading disruptions to essential systems and acute disasters generated by rising temperatures will produce individual and collective psychological, emotional, and behavioural traumas at levels never before seen.

Individual and collective traumas feed on themselves. As the traumatic impacts of the current pandemic have shown, they can distort perceptions and jumble the truth—and they can resurface and aggravate unresolved past traumas like historic racism and economic inequality. They can also produce dangerous polarization among people, trigger violence, and reduce society’s ability to resolve problems.

Time is of the essence to prepare every U.S. resident for the protracted mega-emergency speeding our way. If we remain ill-equipped, the resulting individual and collective traumas will threaten everyone’s health, safety, and well-being. Further, they will make it all but impossible to enact the changes required to slash emissions and reduce temperatures to manageable levels.

Direct human service and single-person psychological treatment program —while they will remain important—were set up for different conditions and cannot address the scope and scale of the individual and collective traumas that lie ahead. To prevent and heal large-scale traumas, we must expand the mental health system to place an equal emphasis on a public health and prevention science approach.

A public health approach prioritizes preventing health and social problems, not merely treating them after they appear. It does so by enhancing and augmenting individual and collective wellness and resilience skills, social support networks, and other strengths and resources known as “protective factors,” which buffer people from the forces that generate traumas. It also recognizes that most individual, family, and community mental health problems result from numerous interrelated factors that require multisystemic responses—not a few siloed interventions focused on individuals or families who are deemed to be high-risk, or who show symptoms of psychopathology.

The growing interdisciplinary field of prevention science expands on the public health approach by showing that many mental health and psychosocial problems are avoidable and that public health initiatives can enhance wellness and resilience.

There is a growing consensus that the most effective way to prevent and heal individual and collective traumas is to engage a wide and diverse array of respected local community leaders and organizations, with a special emphasis on marginalized groups, in designing and implementing actions that build the capacity for mental wellness and resilience among all residents.

Many such initiatives already exist throughout the U.S. They are usually led by trained residents, and not mental health professionals. (Mental health professionals participate and support the community initiatives and assist people who, even after engaging in those community-based initiatives, still cannot function or remain at risk of harming themselves or others.) Community-based initiatives use evidence-based, historical, and culturally-tailored approaches to build and strengthen protective factors that prevent and heal traumas.

Even as the Biden administration aggressively aims to reduce emissions, it is imperative that it—as well as states, cities, and organizations focused on mental health—swiftly act to scale up existing community-based initiatives and galvanize many additional ones to pre-empt and heal the mental health and psychosocial issues that climate change will bring. Too much is at stake to ignore the problem.

Bob Doppelt is coordinator of the International Transformational Resilience Coalition (ITRC), a network of mental health, social service, climate, and other professionals working to build universal capacity for mental wellness and resilience for the climate emergency.

Dr. David Shern, senior associate, Department of Mental Health at Johns Hopkins University and vice board chair of the Campaign for Trauma-Informed Policy and Practice

Dr. David Pollack, M.D., professor for public policy in the departments of Psychiatry, Family Medicine, and Public Health and Preventive Medicine at Oregon Health and Science University, and board member of the Climate Psychiatry Alliance