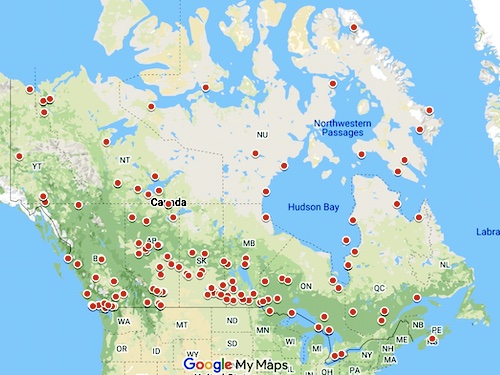 Residential Schools in Canada Interactive Map by The Canadian Encyclopedia

Warning: This story contains details of residential schools and the abuse that took place there.

With the discovery of the remains of more than 1,000 Indigenous children in unmarked graves at former residential schools in Kamloops, Brandon, and Cowessess, Saskatchewan, Canada’s national holiday July 1 is an essential moment for those of us in the settler community to absorb and reflect.

215 children in Kamloops, British Columbia. 104 in Brandon, Manitoba. 751 at the Marieval Indian Residential School in Cowessess. And many more revelations to follow. All of them ripped away from their families and communities, subjected to brutal physical and often sexual violence, beaten for speaking their own language, then dead of neglect, starvation, or suicide, most of them in unmarked graves, their parents never even notified.

For anyone who’s a settler who aims to be any ally to the First Nations, Métis, and Inuit demanding their voices be heard, it should be so very tempting right now to roar our support. To roar back at partisan operatives whose kneejerk response is to deny the searing history of the residential school system, then look for political advantage in the heartfelt calls to scale Canada Day back or cancel it outright.

But there are times to roar, and times to listen. Here is just a sampling of the voices, history, and resources we’ve been following, and you can use the comment section at the end of this post to add more.

• Law professor Mary Ellen Turpel-Lafond (Aki-Kwe), director of the Residential School History and Dialogue Centre at the University of British Columbia, wrote in late May that the “unthinkable, undocumented, and yet known” revelations now being shared outside the affected communities are just the tip of the iceberg.

“These are stories of people disappearing, violence and physical harm, land and property being taken, and culture and language being outlawed. Some of these stories are shared outside of the communities. Many of them are not. They echo with pain and trauma that is often too much to share broadly.”

• The better part of a decade ago, the Truth and Reconciliation Commission “identified the names of, or information about, more than 4,100 children who died of disease or accident while attending a residential school,” the TRC states on an archived page for its Missing Children Project. “Residential school survivors knew where the children were buried because some of them had dug their graves,” writes McGill University professor Cindy Blackstock, a member of the Gitxsan First Nation, executive director of the First Nations Child and Family Caring Society of Canada, and National Public Health Hero. “The buried children died afraid and alone—away from their families—in ‘schools’ that were more akin to re-education camps, run by the Canadian government and the Christian churches from the 1830s to 1996.”

Blackstock recalls warnings by Dr. Peter Bryce, chief medical officer of health at the Department of Indian Affairs in 1907, that unequal funding and malnutrition were driving tuberculosis rates 20 times higher at the schools than elsewhere. “In that Canada fails to obviate the preventable causes of deaths, it brings itself into unpleasant nearness to manslaughter,” lawyer Samuel Hume Blake opined in 1908.

But “Canada refused to implement Bryce’s reforms and pushed him out of the public service in 1922 for refusing to stay quiet,” Blackstock writes.

• At Indigenous Climate Action, Executive Director Eriel Tchekwie Deranger writes in depth about the “anger, outrage, sadness, numbness, and fatigue” that followed the initial revelations at Kamloops. “I am the first generation on my paternal side to not be forced into a residential school. The. First. Generation. Let that sink in for a moment. Many of my relatives just slightly older than me went. This means some of my cousins were subject to the tortuous treatment that went on in these schools. I narrowly escaped this fate.”

She adds that “blood memory of this trauma coursed through my veins with the same veracity as my connection to the land and my understanding of who I am as a Dene woman. We are of the land and they will come to try and take you from all that you are.” (There is so much more to Deranger’s account. Read every word here.)

• In the Globe and Mail, Anishnaabe journalist and speaker Tanya Talaga urges Canadians to “help us find every burial site. Bring every lost Indigenous child home. Prove that you are who you claim to be.” She describes a news conference last Thursday that had Chief Bobby Cameron of the Federation of Sovereign Indigenous Nations in Saskatchewan “speaking to the world on his phone from his car” after the Cowessess First Nation reported the 751 unmarked graves at the Marieval school.

“We had concentration camps here,” he said. “We are seeing the result of the genocide Canada committed here. We will not stop until we find all of our children.”

• Indigenous education scholars Jennifer Brant and Eve Tuck critique a Grade 8 history text that shows the continuing, severe gaps in the way Canadians teach and learn about residential schools. A takeaway quote from Canada’s first prime minister, John A. MacDonald, from an 1883 House of Commons debate: “When the school is on the reserve the child lives with its parents, who are savages. He is surrounded by savages. Indian children should be withdrawn as much as possible from the parental influence.”

• Lynn-Marie Angus, a member of the Gitxaala, Nisga’a, and Métis Nations and co-founder of B.C.-based Sisters Sage, an Indigenous brand that hand-crafts wellness and self-care products, was one of several people the CBC approached for their reactions to the #CancelCanadaDay hashtag.

“It’s really difficult right now for Indigenous folks. So we’re all really suffering and traumatized and dealing with this very publicly through social media,” she said. “There’s a saying that people are saying now: There’s no pride in genocide. And that’s so true. So it’s hard to be proud to be Canadian. I’m proud to be an Indigenous person. Our existence is our resistance. We are still here.”

• Shari Graydon of Informed Opinions recounts her own gradual realization of her history as a settler, concluding that this is not a year to celebrate Canada Day. “The holiday has become for me a reminder of the unspeakable wrongs my ancestors visited upon those who inhabited this land for many centuries before white settlers arrived,” she writes. “Wrongs that many governments have continued in my lifetime.”

• On The Missive, Calgary journalist Jody MacPherson connects colonization and the failure to listen to Indigenous knowledge back to the climate crisis and the unprecedented heat wave now gripping much of North America. “We must begin to recognize the colonial structures that were created and we must dismantle them and rebuild better, more inclusive structures,” she writes. “We have to honour the cultures we’ve previously dismissed. We recognize the wisdom of Indigenous people who’ve been living here for thousands of years.”

All of which “involves significant changes, and it’s much bigger than just the minor inconvenience of cancelling Canada Day, which many are even unwilling to do,” MacPherson adds. “That this symbolic gesture seems to be too much for some people, is so very disappointing.”

History (Past and Present)

• This timeline, first published by the Canadian Broadcasting Corporation in 2008 and last updated in 2014, traces the history of the residential school system back to the 1820s, its early precursors to the 17th century.

• This site plan [pdf] came from the residential school that operated at Fort Simpson, Northwest Territories between 1960 and 1988—within living memory for many of us, and while our current prime minister’s father was in office. It includes all the deliberately planned, purpose-built features you would expect in any self-respecting 19th or 20th century boarding school—the buildings, the separate playgrounds for girls and boys, the fields for growing vegetables, and a graveyard for the kids who didn’t survive.

• In a poll by the Assembly of First Nations and the Canadian Race Relations Foundation, conducted in the week after the first news reports from Kamloops, two-thirds of Canadians said they’d heard little or nothing of the residential school system until it became national and international news.

• The Royal Commission on Aboriginal Peoples conducted research, held special consultations, and received submissions and testimony on the residential school system. The Commission filed its final report in October 1996.

• First Nations Law produced a February, 2020 explainer on Aboriginal title and the rule of law, aimed at clearing “misconceptions and conflicting information” around the interplay between traditional governance systems and elected chiefs and councils.