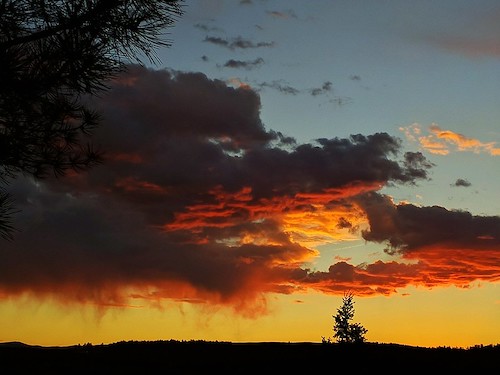 As health authorities in British Columbia declare the ongoing heat wave a greater threat than COVID-19, experts are warning that the heat, arriving on the heels of the driest spring on record, is setting the stage for a summer of devastating wildfires.

Temperatures are forecast to obliterate records in many parts of southern B.C.—including Nelson, where the thermostat is expected to reach a harrowing 44°C, nearly 20 degrees above normal. Officials in the province are reaching out to help the most vulnerable cope with heat that meteorologists are describing as “extreme” and “unprecedented,” reports CBC News.

While those who can escape to shady parks or crank up the AC, concerns for those who lack such routes to keeping cool—the elderly, sick, isolated, or unhoused—are forcing some officials to weigh pandemic protocols against more immediate risks.

“The Interior, Fraser, and Vancouver Coastal health authorities say that anyone having trouble breathing while wearing a mask, inside or outside, should remove it immediately,” CBC writes. And in cooling centres now open in many parts of the province, “no one will be denied access due to crowding or physical distancing.”

BC Hydro, the province’s power utility, is pitching in to help ensure the safety of citizens, cancelling the majority of its planned outages and suspending disconnections for unpaid hydro bills.

The “heat dome” that’s causing these temperatures over Western and Northern Canada and the Western U.S. is an intense high-pressure system that is usually parked further south this time of year, explains The Weather Network. Because it is hitting regions unused to such temperatures, the heat wave is “particularly perilous,” the weather news agency writes. For example, “60% of British Columbians do not own an air conditioner in their households.”

“We can’t stress enough how impactful this heat will be to nearly every person and community in the Pacific and Inland Northwest region,” the Service warned.

Larry O’Neill, Oregon’s state climatologist, told the Post that while heat waves in June are not uncommon for that region, the intensity of the current event is unparalleled. “Other past exceptional heat waves that we’ve had in the Pacific Northwest—they’ve all occurred after mid-July,” he said.

As The Mix went to virtual press, the normally temperate city of Seattle—which the Post cites as the least air-conditioned metro area in the United States—was forecasting a Monday temperature of 42°C.

In its coverage of this “mega-heat wave in the middle of a decades-long megadrought,” Grist stresses the urban effects of the unhappy conjunction of heat waves and air pollution. As the air under a heat dome is typically quite stagnant, “everything—the pollution, the smoke, the ozone—gets trapped right here,” meteorologist Chris Tomer told FOX31 News in Denver. “We’ll rebreathe it, days and days out.”

The Post adds that summer thunderstorms have started arriving in the regions “several weeks earlier than usual,” a “very concerning” factor that could further increase the wildfire risk, said meteorologist O’Neill.

Citing a Predictive Services fire weather outlook for Northern California—which is currently enduring its third extreme heat wave since late May—the Post writes that “a heat wave followed by a few days of lightning and then followed by another heat wave on top of critically dry fuels is a recipe for multiple ignitions and heightened potential for large fire.”

Nuclear legacy is a costly headache for the future